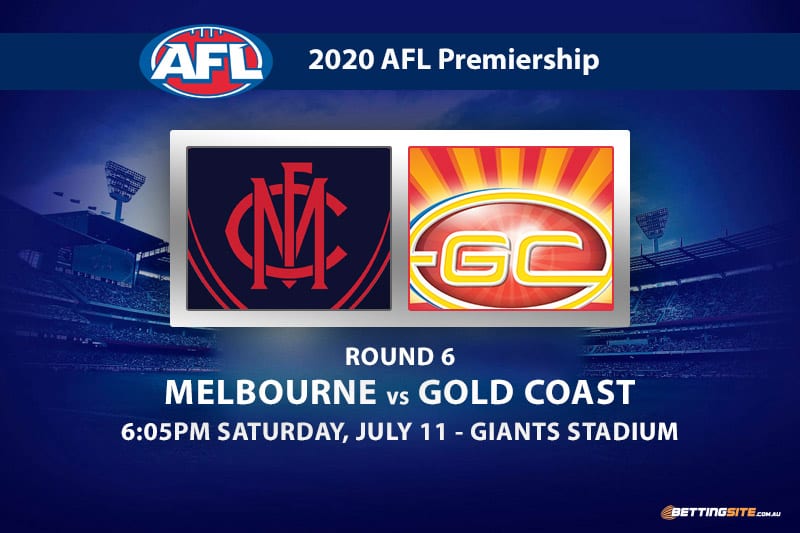 The first of two Saturday night clashes in round six will see the Gold Coast Suns take on the under-fire Melbourne Demons at Giants Stadium.

Melbourne full-back Steven May left Gold Coast at the end of 2018 to pursue finals footy, but it is difficult to say which of these sides is better poised to reach the top eight.

The Suns sit sixth on the ladder and boast of an exciting crop of young players, but it looks like they will be without the phenomenal Matt Rowell for the rest of the season after he underwent shoulder surgery during the week.

Simon Goodwin still hasn’t managed to drag his Demons out of the malaise that gripped them last year, as they remain 16th on the ladder with only one win – a narrow one over Carlton – to their name in 2020.

When these teams last met, Melbourne kicked a late sealer to escape with a one-point victory that would later ensure the Suns wound up with the wooden spoon.

Despite the teams’ respective ladder positions, this should be a tight, heavily contested affair that may well go down to the wire again.

The 2020 AFL season has been unique and unpredictable, but one aspect we really enjoy is the freedom given to the fitter players in the competition. Ed Langdon may not be the most high-profile wingman around, but he has found plenty of ball since moving from the Dockers to the Dees and should produce good numbers against the Suns.

It sounds strange to say this about a bloke who has only five senior games under his belt, but the Suns need someone to stand up in Matt Rowell’s absence. Touk Miller is one of their go-to guys in midfield and looks ready to take on more responsibility as a ball winner. As one of the leaders in the squad, we think Miller is a good chance to be Gold Coast’s top disposal getter on the day.

The Demons are finding it hard to score this season, which is strange considering they have some classy customers in the forward half. Bailey Fritsch is a very clean player that makes the most of his opportunities, which is why we think he will two majors against a Gold Coast side that has defended the tall options well in 2020.

While his output on the scoreboard is not as great as other key forwards in the league, Sam Day has been marking the ball well and finding plenty of opportunities in front of goal. We like Day as a goalkicker this week, as his bodywork has improved to the point where he can take contested grabs deep inside 50 to set up easy chances.

Match totals have been difficult to predict this year, but this one looks straightforward. The Demons are one of the lowest-scoring teams in the competition, while the Suns are missing the huge production of Matt Rowell. We think this match turns into a bit of a slugfest and goes under the 119.5 line.

The highest score the Demons have tallied this season was 54 back in round two, but we still think they have what it takes to topple the Suns this week. Melbourne has one of the shortest injury lists in the league and the best 22 need to start delivering the goods.