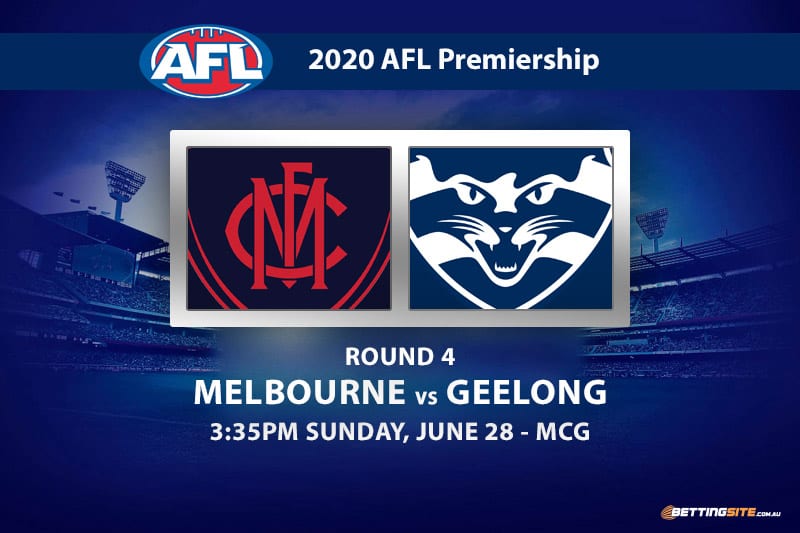 After missing round three due to a COVID-19 scare, the Melbourne Demons will get back on the park to face the Geelong Cats at the MCG this Sunday.

Besides seeing what kind of shape the Dees are in after an unexpected week off, the big question is how the Cats respond after losing to Carlton at home.

An underrated player that will be missed this week is Rhys Stanley, who suffered a minor knee injury against the Blues, and that opens the door for Melbourne’s Max Gawn to dominate this contest.

Both sides look set to make a host of changes, with the Cats managing Harry Taylor’s fitness and the Demons naming both Michael Hibberd and Kysaiah Pickett in the extended squad.

Geelong stormed home to win by 80 points when these teams met last year, but 2020 is shaping up to be one of those bizarre seasons where anything can happen.

Clayton Oliver has collected 40 disposals twice in his young career, both against Geelong. It appears that Oliver enjoys the contest against the likes of Patrick Dangerfield and Joel Selwood, which is why we think he will eclipse 25 this Sunday.

Oozing in potential cult status, Quinton Narkle has the talent and ability to become a very important player for the Cats. The young indigenous star is finding the football at a decent rate and looks more comfortable with each passing week. He was one of the few players that could hold their head high in last week’s loss to Carlton.

Melbourne elevated Max Gawn to the captaincy because he is a fierce competitor that leads by example, and we think this is a match where he can be the difference. Gawn should dominate the ruck battle against the inexperienced Darcy Fort and push forward to create a few scoring opportunities.

Footy is pretty easy when your name is Gary Ablett. The veteran superstar now spends more time in the forward line than the midfield and often hits the scoreboard, kicking multiple goals in 17 of his last 46 matches. If the opportunities are there, Ablett should kick a couple against the Dees.

We really don’t know how to assess the Demons yet, as their only two matches have been a tough loss to the Eagles in Perth and a strange game against the Blues in round two. We do, however, think these two sides have strong forward targets and some classy users in midfield, pushing us to believe they should both score over 60 points this Sunday.

Everyone at the Cattery will be determined to prove that last week’s loss to the Blues was an aberration and nothing more. Geelong will bounce back in a big way and clear the line with ease.