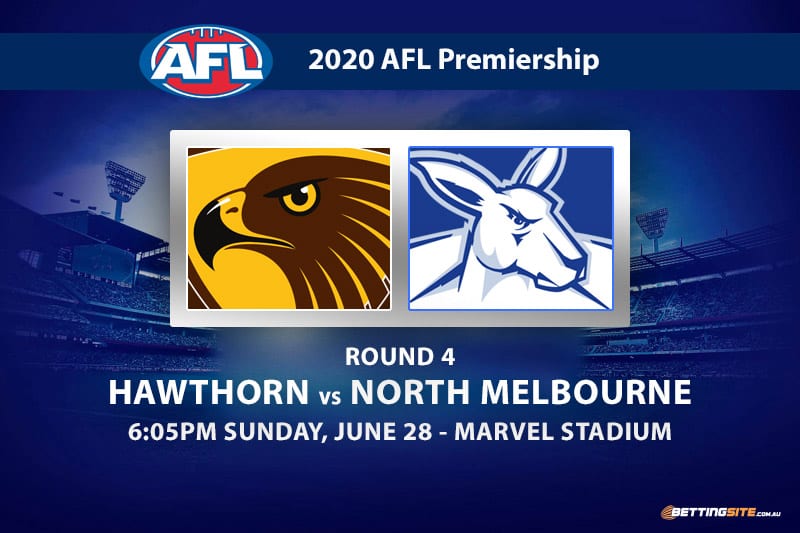 Hawthorn and North Melbourne will fill the Sunday evening timeslot this week in a clash that could have consequences for their finals aspirations down the road.

These teams halved their two clashes last year and both have made big strides as they look to break into the top eight in 2020.

Rhyce Shaw has the Kangaroos playing a good, hard brand of footy, while the Hawks look rejuvenated with Tom Mitchell back alongside Jaeger O’Meara and James Worpel in midfield.

Ben Cunnington was a late out last week for North Melbourne’s loss to the Sydney Swans, but the rock-solid midfielder is back to face the Hawks.

Hawthorn came out of round three with no casualties, so it will be interesting to see if Alastair Clarkson sticks with the same 22 that toppled Richmond last Thursday night.

Isaac Smith was best afield in last week’s win over Richmond and will look to follow up that effort when he faces the Roos. North Melbourne may struggle to find the right matchup for the explosive wingman, who had 29 touches and a goal against the Tigers.

It feels like Trent Dumont has been around for a long time, but the 24-year-old has played only 85 games of AFL footy and is just entering the peak of his career. Averaging just under 24 touches in 2019, Dumont has started 2020 on the right path and brings decent form into Sunday’s clash with the Hawks.

There are not too many forwards that have the talent Chad Wingard possesses. The former Port Adelaide star is equally dangerous around stoppages and on a lead, making him a good choice for the first goalscorer starting in the forward pocket.

Ben McEvoy has made an impressive transition from the ruck to the back line, but can he handle the likes of Ben Brown? The North Melbourne forward’s running patterns and short leads can turn defenders dizzy over the course of a game, and we don’t think McEvoy is ready for it.

Every round there has been a game that scores much higher than the rest, and we think this contest at Marvel Stadium is the one to look at this week. Both teams have productive forward lines and have scored well this season, which will only be emphasised under the roof at Docklands. We can even see this contest going above 150 total points if the players start hot.

Hawthorn to win by 1-39 points

Rating these sides is tough as they have both lost and won against a variety of opponents so far, but the Hawks are our pick this week following their faultless performance over the Tigers. Hawthorn is also well rested following a nine-day break as opposed to the Roos’ seven-day turnaround.