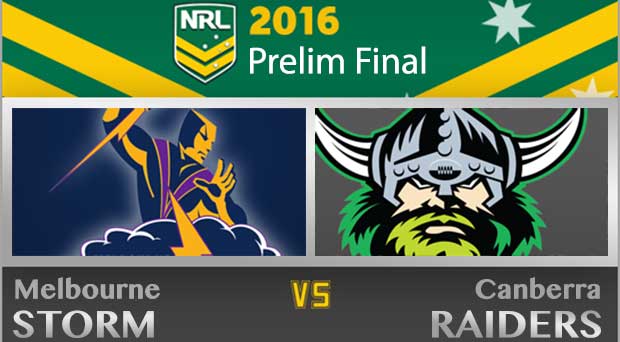 The finals so far:

Perhaps a week earlier than expected, first and second on the NRL ladder meet in this weekend’s preliminary final to determine who goes through to next week’s Grand Final.

The Melbourne Storm are in a fantastic position to make it through to the 2016 big dance after a professional week one win over the Cowboys.

The Storm’s older brigade will have relished their week off and will be fit and raring to go on Saturday night.

Canberra was left reeling after a shock week one loss to the Cronulla Sharks at home, but bounced back last week, emphatically defeating the Penrith Panthers 22-12.

It was a welcome return to the top grade for Blake Austin, who had previously missed a month of football after injuring his hand in a training mishap.

The star fullback scored the first try of the match, but split the wounded hand in the process, but the 25-year-old said making it through the game in one piece will help put his mind at ease for Saturday’s crunch encounter.

“It was actually the best thing that could have happened,” Austin said of reinjuring his hand.

“I’d been nervous going into that game. I was confident it was OK but you never really know until you get out there.

“I was pretty scared heading in, to be honest, but I won’t have those sort of nerves when we get to Melbourne.”

Saturday night’s winner is likely to go into next weekend’s Grand Final as the favourite to take out the 2016 premiership, but we are focusing on the player taking to the field for this article rather than the outcome of the match.

Let’s take a look at the markets and find some value.

Fijian gun Suliasi Vunivalu is set to be one of the key players in Saturday night’s preliminary final match up, and we are certain his try scoring prowess will come to the fore at AAMI Park.

The 20-year-old has been a sensation since debuting this year for the Storm, scoring 23 tries across 19 games in 2016.

So prolific was Vunivalu, he set an NRL record for the most tries ever for a player in their debut season, as well as the most tries by any Storm player ever in a single campaign.

Sportsbet.com.au has taken twice the amount of money on Suliasi Vunivalu to score the first try on Saturday night and it is hard to argue with the cash.

Vunivalu to score a try on Saturday night for us is a lock, and we are confident that he will be able to cross the chalk for the first major of the match.

Blake Austin is one of the league’s best fullbacks and he has an uncanny ability to sidestep players to make them look foolish.

Austin’s average last year of metres carried (69.52) far exceeds where WilliamHill.com.au has set the line on Saturday night and even an injury-impacted 2016 could not stop him from averaging 56.05.

We recommend that anyone who likes making money to put this bet on.