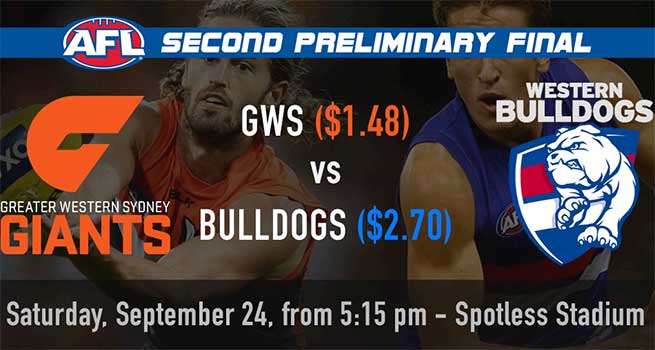 The Finals so far:

Greater Western Sydney Giants 12.19 (91) defeated Sydney Swans 7.13 (55)
Giants had a week off due to winning the qualifying final

IT’S a battle of the westerners on Saturday afternoon as the Bulldogs travel to Sydney to face the Giants for a shot in the big dance.

The most exciting thing for impartial fans about this contest is the fact that either the long-suffering Dogs fans will finally get to see their side play in a Grand Final, or the AFL’s newest franchise will get their moment in the sun.

After a four-year dominance which has seen Hawthorn play in a quartet of Grand Finals, it will be a welcome breathe of fresh air.

The Giants might be the hot favourites in the betting market, but coach Leon Cameron said his men will be taking nothing for granted heading into Saturday afternoon.

“I went down last Friday night and they (the Bulldogs) were outstanding.” Cameron said.

“To knock off Hawthorn the way they did was simply awesome, and they’ve beaten last year’s Grand Final sides in the space of two weeks, so it’s going to be a huge challenge for us.”

It looms as a fascinating contest for two teams who do not have a lot of team success under the belt, but we are focusing on the players for this prelim rather than the match itself.

Last week we got a terrific $3 return on a player exotic bet and this time around we are confident we have identified some more investments that will return a healthy profit.

All-Australian half back Heath Shaw is our selection to collect 30 or more touches on Saturday.

The former Magpie has been productive throughout 2016, averaging career-highs across the board, but most importantly in the disposal category.

Five times this year Shaw has chalked up 30 or more touches in a game, and the last time the two teams met the 30-year-old gathered a career-best 38-disposals back in round 9.

The Dogs are sure to clamp down a lot harder on Shaw in a preliminary final, but the creative rebounding defender is sure to find ways to get the football and his teammates will be looking to utilise his superior distribution skills as much as possible.

The $4.10 on offer at WilliamHill.com.au for Shaw to get 30 or more touches on Saturday is too hard to ignore.

Heath Shaw is $4.10 to collect 30 or more disposals on Saturday night at WilliamHill.com.au

The former All-Australian was the difference against the Swans a fortnight ago, booting three goals to help his side pull away in the third quarter.

There is no obvious match up for Cameron given his speed and athleticism and we believe he is over the odds to boot the first major on Saturday.

Jeremy Cameron is $8 to kick the first goal of the match on Saturday at Sportsbet.com.au

Last week the prolific Jackson Macrae got back to his prolific best against Hawthorn in the Bulldogs’ semi-final win, amassing a game-high 39 touches.

The former number six draft pick has had seven games this seven gathering 30 or more disposals, and given all the attention from the Giants’ on ball brigade will go to Marcus Bontempelli, we are anticipating that Macrae gets off the chain once again.

The $2.05 on offer at WilliamHill.com.au is a much better price than we were expecting and we recommend our readers snap the price up before he comes in to a much shorter quote.

Jackson Macrae is $2.05 to get 30 or more disposals on Saturday night at WilliamHill.com.au

Our first goal scorer selection for the Dogs is Tory Dickson

The Bulldogs’ sharpshooter was uncharacteristically inaccurate in front of goal last week, missing an opportunity to kick the first goal of the match as well as missing two other gilt edged chances in the first half.

Dickson is a dead-eye-dick around goals normally and we expect him to bounce back accordingly.

Tory Dickson is $11 to kick the first goal of the match on Saturday at Sportsbet.com.au