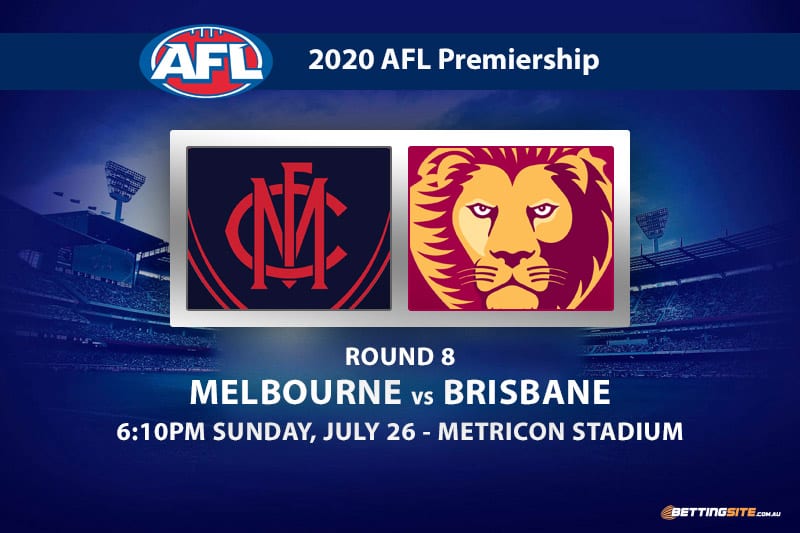 We can expect some quick, slick footy this Sunday night when the Melbourne Demons and Brisbane Lions clash in round eight of the 2020 AFL season.

Simon Goodwin has brought the Dees back to something like their best in the last two weeks with good wins over the Gold Coast Suns and Hawthorn.

The Lions took another scalp with their victory over the GWS Giants, exposing matchups inside attacking 50 and plugging holes in the defence effectively.

There are some big potential contests across the ground in this one, including Clayton Oliver and Lachie Neale in the middle, Harris Andrews on Sam Weideman, and Charlie Cameron going against the experienced Neville Jetta.

Brisbane ruckman Stefan Martin is set to miss the next two months of footy with stress fractures, meaning Archie Smith will have the unenviable task of taking on Max Gawn this weekend.

Aaron vandenBerg is out for Melbourne, while Tom McDonald is listed in the extended squad after two weeks off with an eye injury.

With the Lions missing their first-choice ruckman, big Maxy Gawn could have a field day. The Melbourne captain is on top of his game in 2020 and will relish this opportunity to bury a second stringer. Gawn is averaging a tick under 19 disposals per game and has passed 20 three times in six outings, so there is a fair chance he will hit that mark again on Sunday night.

Although Zorko is yet to pass the 20-disposal mark this season, we like his chances this week. The Brisbane captain has endured an interrupted season with niggling issues, but he was very good last weekend with a team-high 17 kicks against the Giants. Zorko has some form in this fixture, as he racked up 31 disposals and kicked three goals in his last game against the Demons.

No Melbourne player has been in the media spotlight more than Christian Petracca this week, and the talk has been all positive. Petracca has taken a massive step forward this season, becoming a force in the midfield that pushes up the ground with purpose. With six goals from as many games this year, Petracca is every chance to hit the scoreboard this weekend in another big performance.

As the Lions are flush with creative half-backs at the moment, Zac Bailey has had to reinvent himself as a forward pocket. The change has done wonders for the third-year player, who has kicked five goals – including two last week against GWS – in his last five matches. The constant threat of Charlie Cameron means Bailey will sneak under the radar from time to time.

Brisbane Lions to win both halves

One trait that Chris Fagan would be very proud of is Brisbane’s ability to play four consistent quarters and close out a match. In the last three wins, the Lions have won both halves and kicked multiple goals in each quarter, which should not be underestimated. The Demons are starting to build, but they can drop off in patches and fade out of games, which is why they will lose both halves.

Although the Demons are starting to find form, that does not mean they can beat the Lions. Melbourne has defeated the Suns and the Hawks, who have both lost three of their last four matches, while Brisbane is fresh off wins over Port Adelaide and the Giants in the last three rounds.