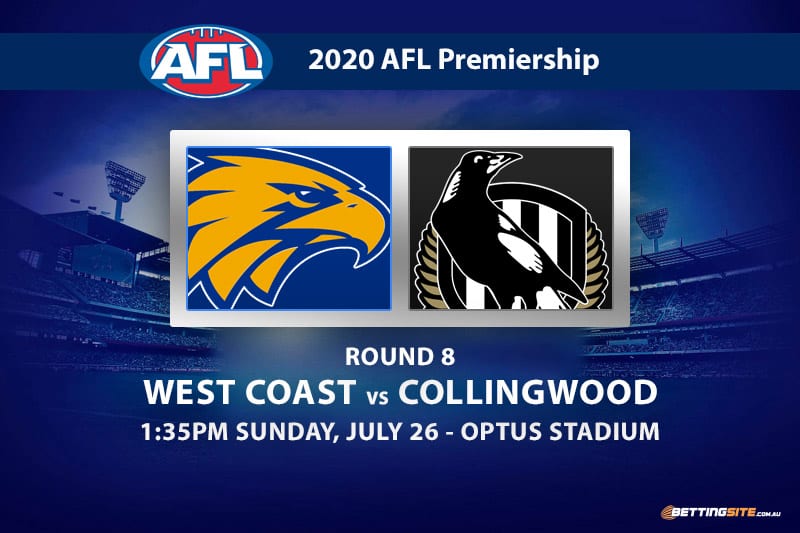 Footy fans in Perth are blessed this week with a massive clash between the West Coast Eagles and Collingwood Magpies at Optus Stadium on Sunday afternoon.

A strong rivalry has formed between the two sides in the past few years, highlighted by their two finals clashes in 2018.

The 2018 AFL Grand Final was voted the best game of the past 50 years in a recent poll by Fox Footy, and we hope this week’s clash brings the same intensity.

Both teams have made big changes heading into this battle, with the Pies losing Jordan De Goey to a long-term finger injury and the Eagles regaining skipper Luke Shuey after a hamstring strain.

Travis Varcoe is also out for Collingwood, so it will be interesting to see who gets in from an extended squad that includes Ben Reid, Brayden Sier and Josh Thomas.

Last time these two premiership contenders met at Optus Stadium was a match to remember, as the Pies scraped over the line by a single point.

The Eagles and Pies have clashed five times in the past two seasons, so we have a pretty good idea about how they match up across the ground. Elliot Yeo has put in some excellent shifts in that span, including a best afield performance in the 2018 qualifying final where he had 36 disposals. Yeo has lifted in the past month for the Eagles, passing the 20-disposal mark in three consecutive games.

The Magpies have adapted well to the absence of Jeremy Howe in defence, as the players they brought in have all done their bit. Isaac Quaynor was given his chance as a running defender and hasn’t taken a backwards step. The Oakleigh Chargers product was especially impressive against Hawthorn in round six with 15 disposals and five inside 50s, and we think he can put up similar numbers in Perth this weekend.

When you think about the Eagles and Magpies playing each other, one thing comes to mind quicker than anything else. Dom Sheed was the hero of the 2018 Grand Final for West Coast, but that match-winner from the boundary was just one of five goals he has slotted in his last four games against Collingwood. Sheed has kicked only one major since the restart, so he is paying decent money to strike this Sunday.

Jordan De Goey grabbed the headlines with five goals against Geelong last week, but it was Will Hoskin-Elliot that consistently provided a strong aerial contest inside 50. He clunked a Mark of the Year nomination last week but failed to convert the easy chance. Like Sheed, Hoskin-Elliott only has one goal since the competition resumed, but we think he will take his opportunities this time.

Although the Pies have conceded the fewest points of any team this season, we reckon the improving Eagles can turn this game into a shootout. West Coast’s gun forwards are starting to fire up after a slow start to the year, while there is a chance Collingwood will adopt a more aggressive strategy in a bid to ignite the top eight’s least potent attack.

Both teams are playing well, but beating the Eagles at Optus Stadium is no mean feat. The Pies might need a game-changing performance from one of their forwards to win this, so the absence of JDG could be costly.