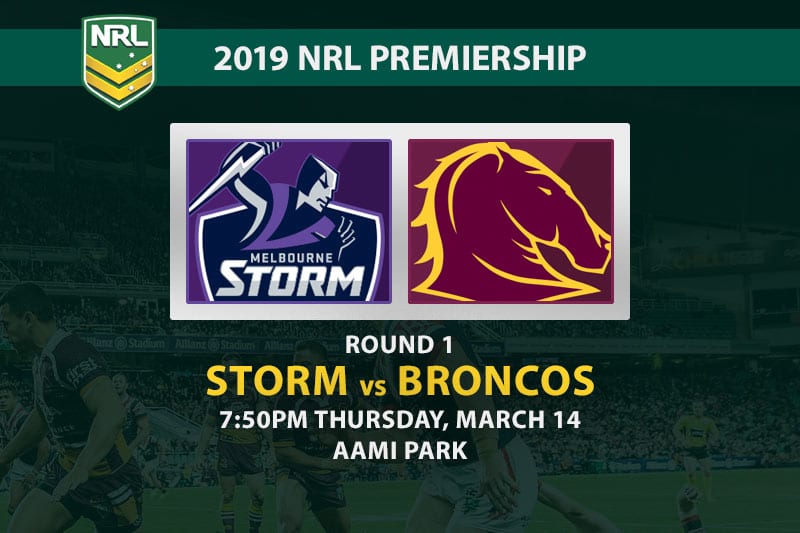 What better way to open the 2019 NRL Premiership season than with a blockbuster bout between two of the competition’s powerhouse teams?

The Melbourne Storm made it to yet another grand final last year, but they were well beaten on the night by an impressive Sydney Roosters outfit.

That was Billy Slater’s last dance in a Storm jersey, while his long-time pal Cooper Cronk was pulling the strings for the opposition.

That leaves Cameron Smith as the last man standing of Melbourne’s Big Three, so it begs the question: is this the end of an era at AAMI Park?

Even with Cronk and Slater gone, the Storm boast an embarrassment of riches all over the park.

Cameron Munster has long eyed off the no.1 shirt, Brodie Croft is one of the game’s brightest young stars, and the wing pairing of Josh Addo-Carr and Suliasi Vunivalu is absolute dynamite.

How will they fare against a Brisbane Broncos side that has eyes only for the flag?

The great Wayne Bennett is gone, but all the right noises are coming out of Red Hill after Anthony Seibold’s appointment as head coach.

There is particular hype around the preseason form of star half Anthony Milford, who has firmed into $21 in the Dally M Medal betting at Sportsbet.

Tevita Pangai Junior enjoyed a breakout 2018 after settling in at prop, while Jack Bird will be eager to put a miserable year behind him and bolster his State of Origin chances with some strong early displays.

Towering winger Corey Oates is another who will want to prove his worth after suffering a series of misfortunes over the past two years.

It didn’t seem possible two years ago, but Addo-Carr may well have usurped Suli Vunivalu as the most dangerous winger in the competition. We like the $4.50 about him to hit the line at least twice.

Roberts has shown in recent years that he is one of Brisbane’s better bets in the big games. The $15 quote for first tryscorer is tempting, but a much more realistic option is the $2.60 to cross at any time.

It is the first game of a brand new season, so it would be foolish to draw too heavily on past form.

However, Melbourne’s long-running record of first-round wins bodes ill for the visitors, as does their head-to-head slate under lights.

There are only a few situations where you consider betting against the Storm at home, and this is not one of them.

Back Craig Bellamy’s men to cover the line with yet another winning start.