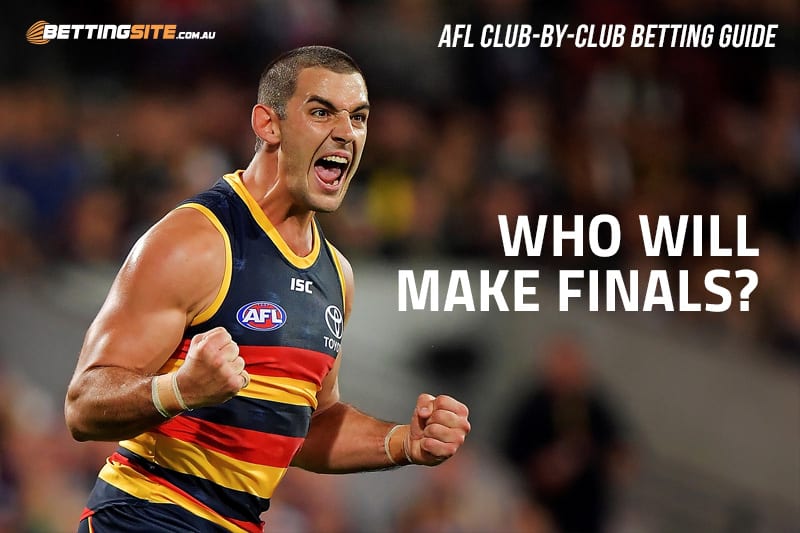 The AFL is one of those magical sports leagues where picking the champions out of the gate is almost impossible.

Teams that were in the finals last season may not be so lucky the next, and many teams that were not in contention are now vying for an opportunity this year.

After going through the contenders for the 2019 AFL Premiership title, now we look at the middle bracket of teams that will have to fight hard for a place in the finals.

Considering the Adelaide list has only become stronger since their 2017 AFL Grand Final loss, they have to be treated as one of the most dangerous teams in the league.

The addition of Bryce Gibbs did not work immediately last season, but the former no.1 draft pick is ready to thrive after another preseason working with his teammates.

Brad Crouch missed the 2018 season entirely due to a series of recurring abdominal strains, but his form in the JLT tournament suggests we can expect the inside midfielder to be a regular starter alongside his ball-magnet brother, Matt.

It was evident that something was holding the club back in 2018, but the Crows are ready to rebound from that embarrassment and anguish in 2019.

Of all the teams that missed the top eight last year, perhaps only Essendon are a better bet for the premiership.

Will the Cats go deep in the finals, or will they be eliminated in the first week as per 2018?

That question might be jumping the gun, because they have to get there first.

Gary Ablett Jr will spend more time in the forward line, allowing him to cause trouble in the most dangerous area on the ground, while Tom Stewart and Mark Blicavs have developed well together as key defenders and will hold down the defensive structures well.

Geelong’s biggest problem is their ruck stocks, which rank among the weakest in the league.

With no genuine ruckmen, but a combination of part-timers, the latest rule changes will trouble the Cats as big men have become vital.

When analysing Hawthorn for the 2019 season, it is blindingly obvious that Tom Mitchell is a gigantic loss.

The 2018 Brownlow medallist is one of the best inside midfielders in the league and often carried the Hawks through matches in 2018, but the Hawks will have to look for inspiration elsewhere now that Mitchell is out of the season with a broken leg.

Luke Breust and Jack Gunston, who were both All Australian forwards last season, are still desperate for another premiership run.

Paul Puopolo is also still active inside 50, alongside his previous captain, Jarryd Roughead.

The backline, led by new skipper Ben Stratton, is filled with elite kicks and talented players such as James Sicily and Blake Hardwick, both of whom caught the eye with their 2018 campaigns.

If not for the injury to Mitchell, the Hawks could have done damage in 2019, but unfortunately for coach Alastair Clarkson, this could be the year where they fall down the ladder.

Another team stacked with talent, but few buyers.

The Swans have already been written off by many past AFL players who say they will drop down the ladder and disappoint in 2019.

With 2016 Rising Star winner Callum Mills returning from a foot injury that ruined his 2018 season, the Sydney midfield is ready for some massive improvement.

Mills will find himself in the middle with regulars Josh Kennedy and Luke Parker, but another name will headline most matches.

We know how damaging Isaac Heeney has been in the forward line, but his vision in traffic and ability to find the ball are second to none and will add serious class to the midfield group.

Lance Franklin, at the ripe old age of 32, is one of the front runners in the Coleman Medal betting at Sportsbet, whilst Jake Lloyd and Dane Rampe could be All Australian candidates by year’s end.

Do not ignore the Sydney Swans in 2019, for they could be a huge surprise come September.

North Melbourne are known to attack the free agency period each year and they found a few quality players in the last offseason.

Jared Polec and Jasper Pittard have come across from Port Adelaide, while the classy midfielder Aaron Hall arrives from the Gold Coast Suns.

With these three inclusions to the team, the coaches and players believe they can go far in 2019.

Any team with Ben Brown in the goal square and Ben Cunnington in the midfield should have some belief, but then you add Shaun Higgins and Polec on the wings and you have a very strong offensive team.

At the other end of the park, injuries to the backline will hinder the Kangaroos early in the season.

Robbie Tarrant underwent shoulder surgery and will miss the first few weeks unless he recovers quickly, while Scott Thompson will miss round one due to a suspension that has carried over from last season.

Majak Daw is also out of action for the foreseeable future.

Once they become fully fit, the Kangaroos will be one of the teams to beat in 2019.

An overhaul of the list in 2018 led to the departure of Chad Wingard and a handful of depth players.

Attacking the draft led to the Power selecting three players inside the top 20: Connor Rozee at pick five, Zak Butters at pick 12 and Xavier Duursma at 18.

All three of those youngsters have enormous upside and are expected to plenty of game time this season.

The Power are at the bottom of the middle class and will find it difficult to win enough matches to make the finals this season, but they have three solid prospects for the Rising Star in 2019.