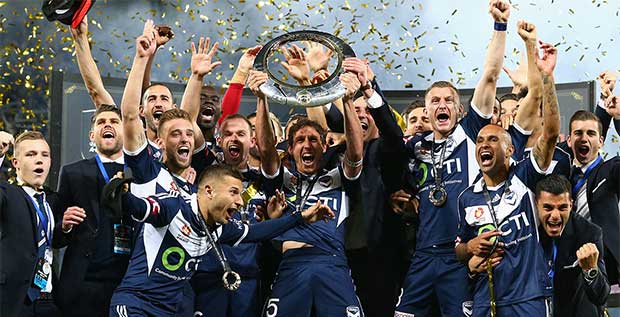 THE A-League season kicks off this Friday night with the Melbourne Victory on a tour of Brisbane to take on the Roar.

And, if you listen to the punters, the A-League title fight is a race in two between the Victory and their bitter cross-town rivals Melbourne City.

The Victory are the $5 favourites with Sportsbet.com.au to be crowned champions at the end of season 2016-17.

But City is hot on their heels and, with the addition of Socceroos legend Tim Cahill, the punters are on the bandwagon, smashing the club into second favouritism at $6, equal with the Perth Glory.

Make no mistake, this A-League season is set to be the most hotly contested in its history, with several teams loading up with A grade talent throughout the off-season.

While Victory are the deserved favourites to win the title, it still looks like a raffle in the lead up to round one.

And Sportsbet.com.au doesn’t think the Victory can kick off the season with a win, installing the Roar as the $2.40 favourite to win the season-opener up north.

But that has not deterred the punters and they have loaded up on the Victory at the $2.75 quote.

And they are on the Victory’s bandwagon for the A-League title too, with Sportsbet.com.au spokesmen Ben Bulmer revealing around 20 per cent of all money on the championship market coming for the dark blue side of Victoria.

But he said the punters were even crazier for Melbourne City, with nearly a third of the money coming for the younger Melbourne club to win their first A-League title.

“Melbourne appears to have a grip on the A-League according to punters, with Victory and City jointly attracting 50 per cent of the money to win this season’s crown,” Bulmer said.

“Victory start the season as title favourites, but more punters are backing City to claim the prize with star recruit Tim Cahill now firmly on board.

“Despite starting the season a title favourites, Melbourne Victory is the outsider for its season opener against Brisbane Roar on Friday night, but plenty of punters reckon they can get the job done at odds of $2.75.”

In this weekend’s other matches, Melbourne City starts as the $2.20 favourite against Wellington Phoenix ($3), with more than 80 per cent of punters backing City to win.

The Western Sydney Wanderers ($2.90) have attracted around 55 per cent of the early money ahead of its local derby against Sydney FC ($2.30), despite starting as the outsider, while more than 90 per cent of punters are backing Perth Glory ($1.50) to defeat Central Coast ($5.50).

Titleholder Adelaide United is expected to get off to a winning start against Newcastle, starting as the $2 favourite ahead of the Jets at $3.40.

A-League Round One odds