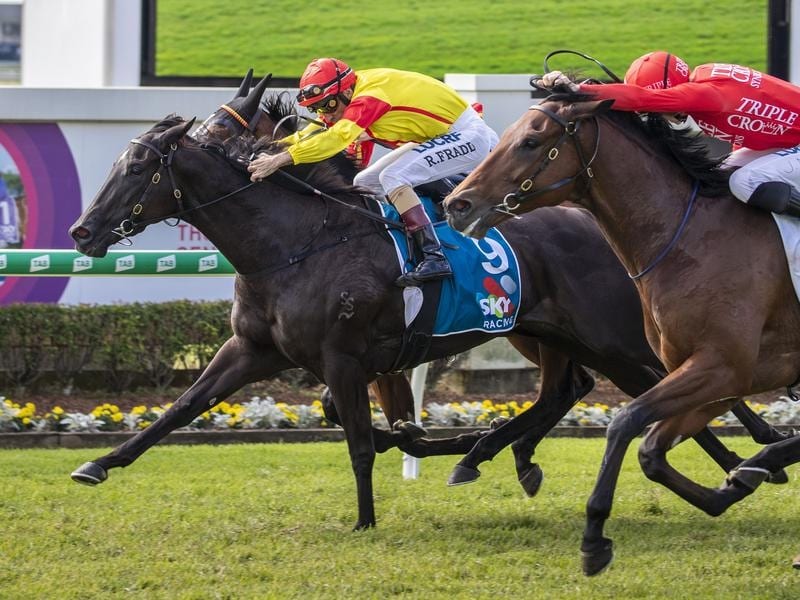 Pretty In Pink (yellow) is one of two good chances in town for jockey Keagan Latham.

Three years ago, South African jockey Keagan Latham was on the verge of walking away from racing.

Living in England and struggling for opportunities, he had lost faith in himself and was at a major crossroads in life.

A product of the famous jockey academy in Durban that has produced the likes of Glyn Schofield and Jeff Lloyd, Latham’s career has taken him around the world.

He had stints in Dubai, where he rode his first Group One winner, Ireland, another brief period riding in South Africa, Mauritius and England, where things started to unravel.

“I had only ridden nine winners or so in my last year in England and I was considering just packing it in altogether and doing something else,” Latham said.

“I’m not the kind of person who gets depressed but I was so disappointed in myself for not succeeding in England that I didn’t actually want to be in the racing game anymore.

One person who had not lost faith was then-girlfriend Nancy, who has since become his wife.

She suggested they make a new start in Australia.

“She said, instead of giving up on yourself, why don’t you go to Australia and just ride work for someone, get away from England and refresh your mind and see where it takes you’,” Latham said.

“Coming here and the Australian people making me feel at home and giving me the opportunity to ride their horses and riding plenty of winners, it has really given me a new lease on life.”

The 31-year-old rides primarily on the provincial circuit but when trainer John O’Shea called his manager a couple of weeks ago offering two plum rides in town, it was a no-brainer.

Latham teams up with the O’Shea-trained debutant Sidearm in the $1 million Golden Gift (1100m) and Pretty In Pink in the Group Two Hot Danish Stakes (1400m).

He gave the pair a spin around at Randwick trackwork on Tuesday and said Sidearm impressed with his demeanour and raw talent.

“He’s got a pretty cool temperament for a Smart Missile. They are known to be quite highly strung horses but he’s a very cool, calm and collected animal,” Latham said.

“He might be a bit green still but the ability is definitely there and if he can put it together on Saturday I think he can run a very nice race from that draw.”

Pretty In Pink was declared a non-runner in the Nivison after the starting gate swung back in her face when the stalls opened.

O’Shea has kept the blinkers on after she trialled sharply in them before that incident and with even luck, Latham expects a strong performance.

Latham is in the top 10 on the NSW provincial jockeys’ premiership and is chasing his first metropolitan success of the season.