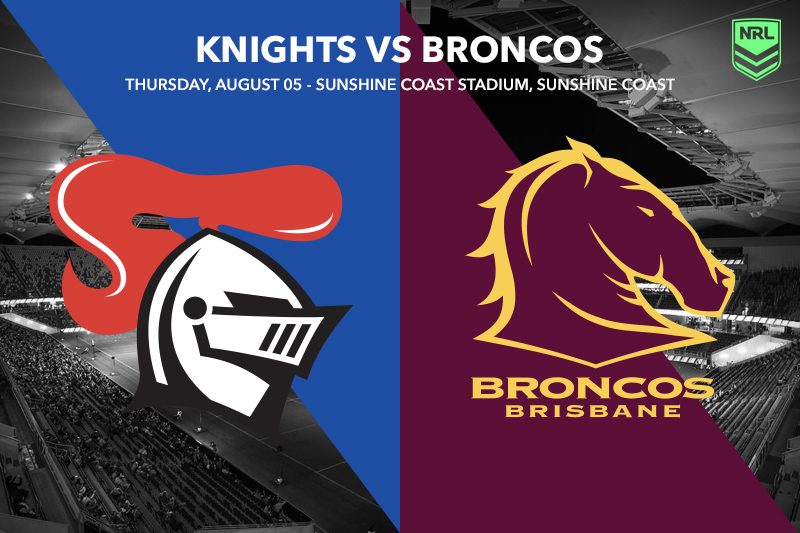 The Newcastle Knights and Brisbane Broncos will face off at Sunshine Cost Stadium on Thursday evening to kick off Round 21 of the NRL premiership. Both teams are coming off impressive wins in Round 20, but it is the Knights who have the most to play for, sitting equal seventh on competition points. Due to the re-scheduling of games in Round 20, it has meant they have to play on a four-day turnaround, which effectively means they’ll be in recovery and won’t get any field sessions in before the match. They still hold $1.36 favouritism with the bookmakers, but it is a dangerous number due to their inconsistency and other factors outside of their control. Mitchell Pearce is a chance to return at halfback and that would provide a huge boost for their chances to play finals in 2021. They are four wins and two losses in his six games this season.

Brisbane were terrific against the Cowboys in a 19-point win and displayed a great deal of enthusiasm, which is going to cause punters to scratch their heads over whether to take them as the $3.25 outsider. The +9.5 head start at $1.90 with the online bookmakers presents terrific value in what should be a close contest on Thursday Night Football.

If Mitchell Pearce is available to play at halfback, Phoenix Crossland will be the player to drop out of the Newcastle Knights squad. Outside of that, it should be the same side which defeated Canberra in convincing fashion less than 100 hours earlier. Such a short preparation makes it hard to predict what we will see, but there is a big chance they start slow and could trail at half time, so keep that in mind for any half-time/full-time doubles.

Enari Tuala is fresh off a hat-trick on the left wing for the Knights and will shape up as a great any time scoring option. Brisbane have to reshuffle their right-edge once more and the left of the Knights was back to its best last weekend. Bradman Best and Kalyn Ponga would complete the left-edge trio of scorers and it would make a great three-leg multi. On a normal week this would be a 13+ result, but the form of Brisbane last week and the short prep make this a 1-12 win for the Knights.

The enthusiasm the Brisbane Broncos played with in the XXXX Derby makes them a dangerous opponent this week. They’ve been well rested in their own beds and should come out of the blocks fast, and it opens the gates for someone like Corey Oates on the left wing to score the first try of the game. Newcastle’s right edge has had problems all year which opens the way for Oates, and the other one to consider is Tyson Gamble to slice through in the anytime tryscorer market.

Brisbane have slowly turned the corner and will still have some tough days to finish the year, but their ceiling on any given game day is now much higher than it was 12 months ago and it makes the +9.5 line hard to resist. They lost to the Panthers twice by eight points as well as Parramatta by that same margin this year, so why can’t they give the Knights a big run for their money?

Two of the three best props in the game will take the field on Thursday evening. Payne Haas for Brisbane and Daniel Saifiti for Newcastle are having terrific seasons on field and have formed a close bond from playing together for New South Wales, so watching these two duke it out in the middle for their respective sides is where the game is going to be won on Thursday. Newcastle showed against Canberra that if Saifiti, and his twin brother Jacob, are able to get some ascendancy in the middle third, Kalyn Ponga and Bradman Best thrive on the back of it. When Haas is rolling up field, it allows Brisbane’s other athletic forwards to use their footwork and line running abilities to create havoc, so an interesting battle is ahead for these two men.

The Knights get the win at the 1-12 margin but they are going to have to work really hard for it. Knowing they get a 10-day break at full time might be a good factor in the Knights toughing this one out, but we think Brisbane can still cover the line and both sets of fans can have a win of some sort.

We are backing Enari Tuala, Bradman Best and Kalyn Ponga to all score a try for a second consecutive week as the Knights win by 1-12 points.