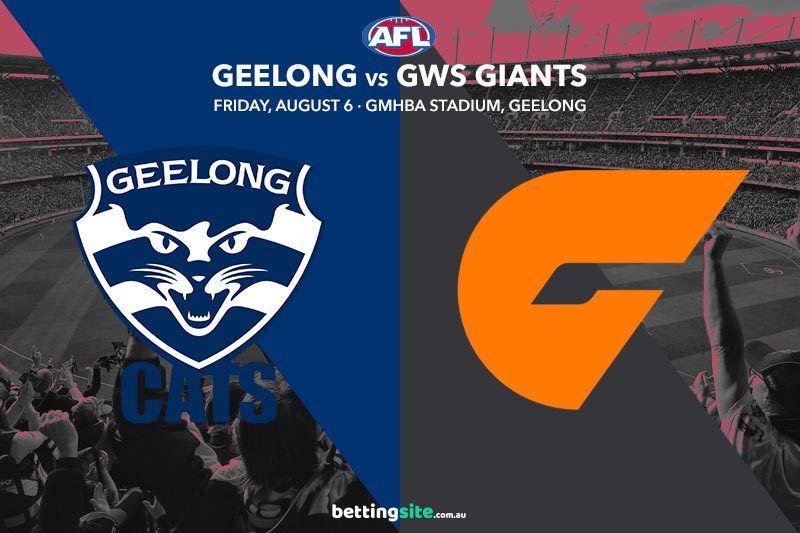 The Bombers and the Bulldogs were originally scheduled to play on Friday night, but now the Geelong Cats and GWS Giants will kickstart round 21 of the 2021 AFL Premiership season at GMHBA Stadium.

Chris Scott’s Cats are the current premiership favourites and sit second on the AFL ladder, yet they didn’t have it all their own way against the 18th-placed Kangaroos last weekend.

Leon Cameron’s Giants could not get the job done against the Power in round 20, which saw them lose their spot in the top eight to Fremantle.

Apart from losing Tom Atkins before the first bounce, the Cats got through the weekend unscathed, while the Giants had both Phil Davis and Jacob Hopper go off with concussion.

The Cats and Giants have an even record from their last five head-to-head encounters, as both sides have won two games and shared a draw back in 2017. It was the Giants who emerged victorious from the last two contests, including their 2019 bout at GMHBA Stadium. Both teams like to control the ball in the back half before attacking, but the winner this week will be whoever can transition faster out of defence and catch the opposition off guard.

Even though Jeremy Cameron is injured for the Cats, they still have a tall forward-line that could expose the Giants while Phil Davis is sidelined. Harry Himmelberg has been swung into defence to give the Giants more height behind the ball, but it leaves them short-staffed in the forward 50.

Both Geelong and the GWS Giants bat very deep in the midfield, which allows both sides to rest their best players ahead of the ball. Patrick Dangerfield and Tim Taranto have spent more time forward in the last few matches, but we think they will do their best work in the engine room this week.

Dangerfield had 21 disposals last round, which is a quiet day by his lofty standards. With Jacob Hopper out this Friday, Taranto needs to use his power in the middle against Geelong’s tough midfield. Both Dangerfield ($2) and Taranto ($1.91) provide excellent value at Sportsbet to collect 25 or more disposals.

We think the Giants can cover their injuries efficiently this week, as they have plenty of talented players on their list. Leon Cameron’s men will come into this contest with no shortage of motivation, as they are running out of chances to lock up a spot in the top eight. The Cats should win this match, but we do not think the final margin will surpass the five-goal mark.

Harry Himmelberg has kicked seven goals across his last four matches for the Giants, but he needs to stamp his authority this week against Geelong. The key forward kicked two goals in his last match against the Cats at Kardinia Park, and he needs to produce something similar this Friday night if the Giants want to stay in the hunt for a top-eight spot.

A big performance from Harry Himmelberg in front of the goals will help GWS cover the line, while Patrick Dangerfield should return to his optimal position and dominate in the middle. These three legs combine for a $10.50 return with Sportsbet.