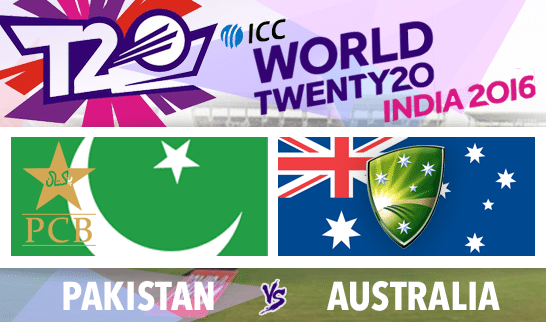 INDIA aren’t the only title fancies who find themselves in dire straights in the early stages of the 2016 ICC World Twenty20.

With New Zealand already qualified for the semifinals, both Australia and Pakistan need victory to remain relevant in Group 2.

That’s especially the case for the Green Shirts, who will be out of the tournament if they can’t stop the rot in Chandigarh.

Back-to-back losses against India and the Kiwis have left Shahid Afridi’s side with only two points from three games, meaning four points and second spot is the most they can hope for when the Super 10 round comes to a close.

With India yet to play an undermanned Bangladeshi outfit, Pakistan’s fortunes will almost certainly ride on the hosts’ clash with the Aussies this Sunday.

But first they must first negotiate the reigning 50-over Cricket World Cup champions.

Australia bounced back from their opening defeat to NZ with a three-wicket win over Bangladesh, although the overall performance at Bangalore left much to be desired.

Chasing 156, the top five set up a straightforward finish before a series of soft middle-order dismissals (read Glenn Maxwell) saw Steve Smith’s side slump from 4/135 to 7/152 in the space of two overs.

The captain was less than pleased.

“We haven’t been good enough in the middle overs,” Smith told reporters after the game.

“We’ve had a bit of travel, but it’s not an excuse.

“Pakistan and India play well in these conditions and we have to do better. Our players have to adapt better.”

One positive was the performance of Adam Zampa, who was named man of the match after snaring three wickets – his first scalps in T20 International cricket.

The rookie spinner was crystal clear on the nature of the task which lies before the Australians: “The equation for us is pretty simple now – win every game.”

If Shane Watson hasn’t quite nailed down his spot in the side, the same cannot be said for his opening partner.

After showing a few nerves against New Zealand on his T20 World Cup debut, Khawaja was at his graceful best in the win over Bangladesh.

The Queensland lefty led the charge with a beautifully compiled 58, and his emphasis on pinpoint placement over raw power and convoluted shotmaking should be a lesson to some of his teammates (read Glenn Maxwell, again).

Can he do it once more against the nation of his birth?

It’s almost sad that the 20-over game only came into vogue during the latter half of the Pakistani skipper’s career.

Afridi and Twenty20 cricket are a perfect match. Whether he is swinging for the fences with willow in hand or bamboozling batsmen with his crafty wrist spin, his hyper-aggressive approach to the game always entertains.

That all-out attitude often comes at a cost, however, as the one they call ‘Boom Boom’ ranks among the most unpredictable players ever to grace international cricket.

But which Afridi will we see on Friday: the match-winner or the scapegoat?