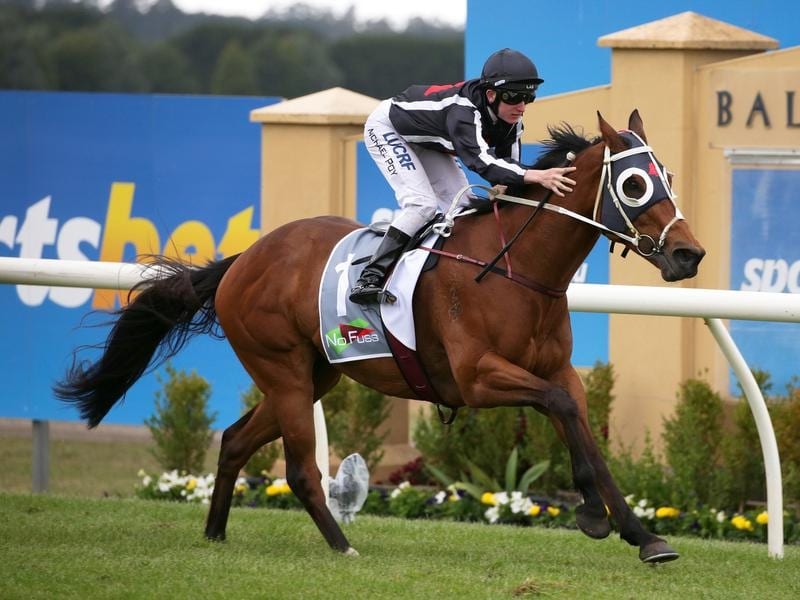 Jungle Edge should get conditions to suit when he runs at Caulfield for apprentice Lucinda Doodt.

Trainer Mick Bell is bullish about the chances of Jungle Edge as the gelding attempts a return to the winner’s list at Caulfield.

Jungle Edge runs in Saturday’s Spicer Thoroughbreds Handicap under Lucinda Doodt for the first time, with her 3kg claim bringing the gelding in with 58kg.

Jungle Edge’s most recent victory came on a soft track at Ballarat in November, conditions he will experience on Saturday.

The gelding started his summer-autumn campaign with consecutive second placings at Randwick and Caulfield, the latest behind Nature Strip.

Bell said that Caulfield effort led to a disappointing Sydney autumn campaign in which he failed to feature in two runs.

“That Nature Strip run tended to set up a few little problems that he carried into Sydney which I think we’re now over,” Bell said.

“I had him X-rayed up in Sydney and there was nothing there structurally apart from some wear and tear.

“I reckon it made his joints play up a bit and I’ve been able to settle them down as much as I can and that’s why I thought his run at Warrnambool was pretty good.”

Jungle Edge finished eighth in the Wangoom Handicap at Warrnambool on May 1.

Bell said Jungle Edge would have needed to set a weight carrying record to win the Wangoom.

“That showed me the horse is back in form as far as I’m concerned,” Bell said.

“And the way this race is mapping there doesn’t seem to be anything that will be pestering him.

“He should be able to control the race, he’s got a good weight and while I haven’t used Lucy Doodt before, my regular rider Jade Darose recommended her.

“The apprentices I have used before have all lost part of their claim and I wanted to get the full three kilos off his back.”