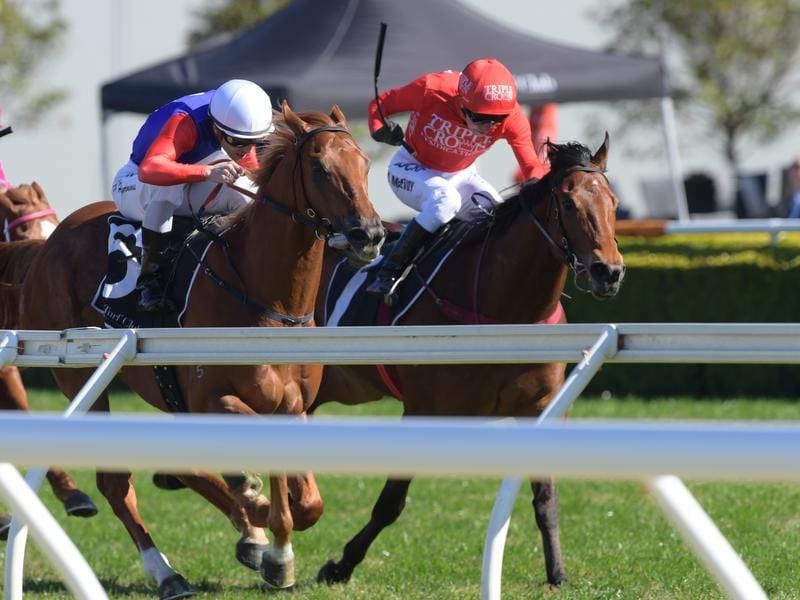 Military Zone (ri) will try to add the Scone Guineas to his Guineas wins at Hawkesbury and Gosford.

A Guineas treble on NSW provincial and country tracks is on the cards for Military Zone when the talented three-year-olds heads to Scone for his latest assignment.

The lightly raced gelding has won four of his eight starts highlighted by victories in the Listed Gosford Guineas (1200m) in December and the Group Three Hawkesbury Guineas at his most recent start on April 27.

Military Zone headlines the field of nine, in which he has the outside barrier, while his Peter and Paul Snowden-trained stablemate Signore Fox is also among the main chances.

Signore Fox also won at the feature Hawkesbury meeting on April 27 when successful in a 1300m benchmark 78.

“They are both progressive horses,” Peter Snowden said.

“They’re both lightly raced and both have got a future, I think.

“Military Zone is probably the favoured one of the two.

“He’s drawn a touch awkwardly but there looks to be a bit of speed in the race which should suit him and he has come on nicely.

“Every start he has kept doing things that are better than the time before. And that’s the sign of a handy horse.

“He keeps stepping up.”