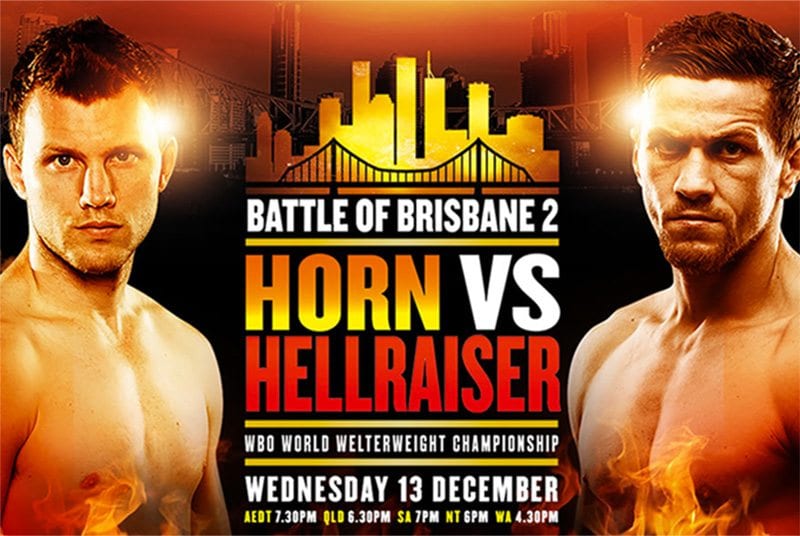 CAN Jeff Horn do it again?

That’s the question the Australian boxing world will be asking ahead of the WBO Welterweight Title fight against UK native Gary Corcoran at the Brisbane Convention and Exhibition Centre from 7.30pm AEDT on Wednesday night.

Was Horn’s win against Manny Pacquiao in July just a fluke?

Perhaps we’re about to find out.

Before the now infamous ‘Battle of Brisbane’, Horn, a primary school teacher, was a complete unknown. Now he’s the Hornet – Australia’s best boxer that could have the world at his feet.

The sequel to the Battle of Brisbane sees the home town man as the heavy favourite at $1.17 with CrownBet, while British native Corcoran sits at $5.

So how do we see this fight unfolding?

Let’s look at the betting markets and find value in the odds on offer.

Our tip: If there’s one thing we learned from Horn’s bout with Pacquaio earlier in 2017, it’s that the guy can take a beating. Even though Corcoran has been described as an attacking boxer, we think that there is some serious value in this fight going the distance at $2.40.

Our tip: If we think it’s going the distance, then it only makes sense to have a good hard look at the $3.30 on offer for Horn to win on points. Horn does not look to dominate in his fighting career to date and will ply his trade and set himself to overcome Corcoran round by round, accumulating another victory.

Our tip: Again, we’ll tip Jeff Horn on points at $2.50 in this market, but there’s some really juicy odds on offer if you think Horn can wear the Brit down in the later rounds. A victory in Round 10 (by any means) is paying a very handy $15.

What Horn and Corcoran are saying

“There’s been a lot of awards nights and functions that I have had to attend but training always comes first and I am fit and ready for a hard 12-round fight.

“It’s (Horn’s weight) coming down but it is always a difficult task.

“Sometimes I feel it just doesn’t want to come off like I want it to. I am about to hit 30 and they say it sticks on you a bit more.

“Hopefully I feel good on fight day after I make the weight.”

“Losing a bit of weight, no matter what you say, it will make you weak. It happens to everyone. (But) I am ready for a hard 12-rounder.”

“Horn is a tough come-forward fighter like me so it’s going to be a very tough, physical fight and I believe I can beat him at that game.

“It will be an exciting fight, the two of us coming together, throwing punches.

“I’m very strong. I’m only a welterweight but I’ve beaten up middleweights and this is the chance of a lifetime for me.’’

All odds are with Sportsbet.com.au and fights are on the PPV package before the Horn vs. Corcoran fight.

Multi tips for the Horn vs. Corcoran card: