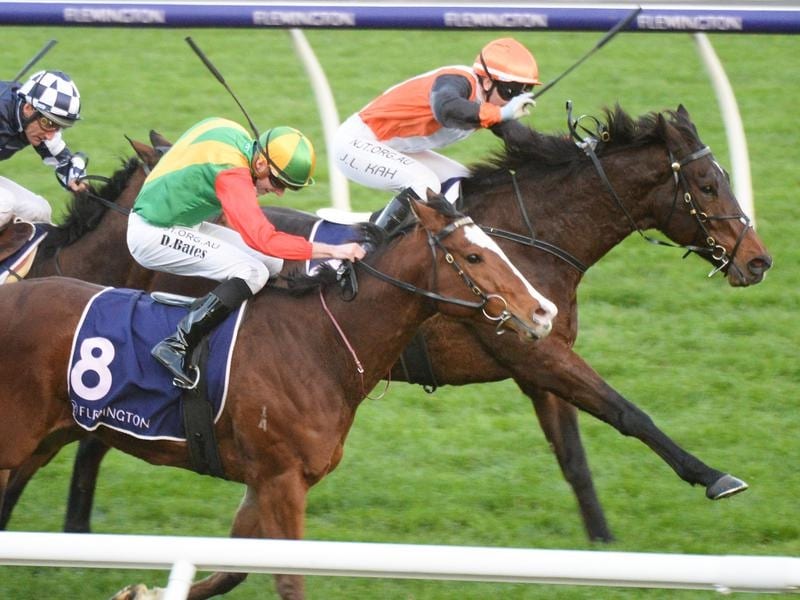 I Am Someone (closest) will chase more stakes success after winning over 1200m at Flemington.

Trainer Paul Preusker has labelled I Am Someone not your average sprinter after a return to winning form at Flemington.

I Am Someone took out the Adam Lindsay Gordon Handicap on Saturday, his first victory since winning the Listed Wangoom Handicap at Warrnambool in May last year.

Preusker is now eyeing another stakes race for the sprinter, the Listed Victorian Sprint Series Final, again at Flemington, on July 4.

After two disappointing efforts last spring, I Am Someone has returned this campaign for a first-up third at Caulfield before his victory on Saturday.

“The deeper you get into a prep the tougher he gets so hopefully I’ve got him here at his top next start.

“I’m really looking forward to see how deep he can go this prep and where we can get to.”

Bates said Preusker and his team should be applauded for getting I Am Someone back to his best form.

He said a lot of work had gone into getting the sprinter to relax.

“He hits a little flat spot when you initially go for him, but in the last 50 metres he really picks up again.

“I think the 1200 metres next start should be ideal as long as he settles like like he did today.”