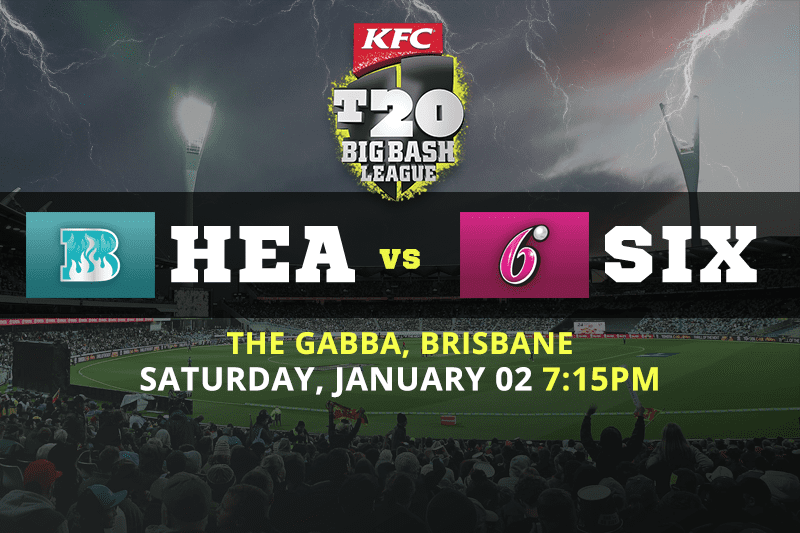 Can the Brisbane Heat shake off their recent nail-biting loss when they host the Sydney Sixers at the Gabba this Saturday night?

Currently sitting atop the Big Bash League standings, the Sydney Sixers have been magnificent this season, winning four of their five games thus far.

Besides a poor opening-night loss to the Hobart Hurricanes, the Sixers have dramatically improved, with four consecutive wins on the board, but their last two haven’t been easy.
A thrilling end to Heat’s most recent match went in favour of the Hurricanes, securing the victory by just a single run after a wild final over from both sides.

It will be a tough ask for the Heat to knock of the reigning champions, but with Chris Lynn hopefully back in the side, anything is possible.

Almost all the Sixers’ batsmen have the capacity for a big innings, especially the likes of James Vince and Daniel Hughes. Hughes already notched up 96 runs against the Stars this season, proving he still has plenty of x-factor. Vince started his season well with a solid 67 off 41, but he hasn’t done much since. Any Sixers batsmen could tally up the Heat this Saturday, but we expect a good match from their third and fourth men.

Although he started his season like a rollercoaster, Philippe has built a platform of consistency over his past two innings. When Philippe hits the ball well, he normally posts a huge score, but we think the opener has realised the importance of building his game, which he has done well over the past week. The Gabba pitch should complement the young star and allow him to thrive.

To Take The Most Wickets – Ben Dwarshius

Not many players have been as consistent with the ball as Dwarshius, who continues to take more wickets each week. Although he didn’t strike gold against the Renegades, he still kept the runs to a minimum and looked dangerous. The Heat love to take on batsmen, which is where Dwarshius can use his variety to trick them into playing a bad shot.

The Brisbane Heat looked very impressive against the Hurricanes in their most recent loss, but we have to go with the Sixers on this occasion. The Renegades played their best game of the season and still couldn’t topple Sydney, giving us great confidence in their batting order. The Sixers will beat the Heat this Saturday.