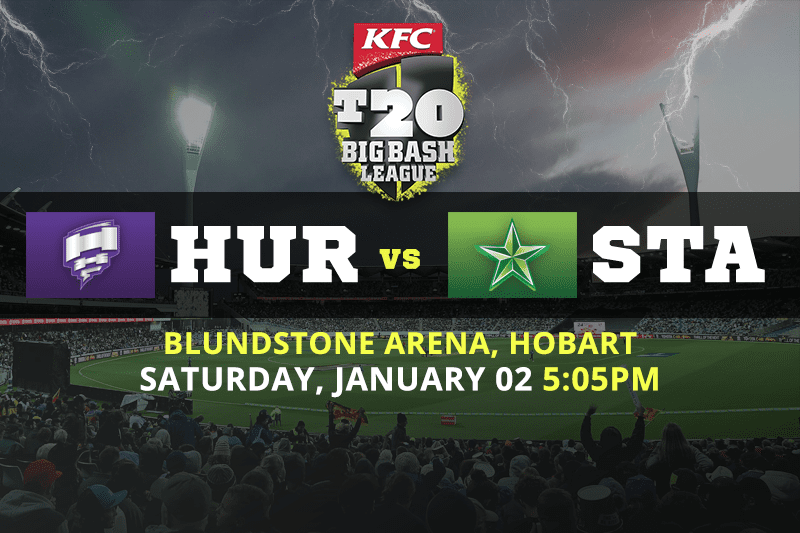 The BBL10 train keeps chugging along as the third placed Hobart Hurricanes come up against the fifth placed Melbourne Stars at Blundstone Arena. This will be the first of two meetings within 48 hours between the two sides in Hobart, and with both sides looking to solidify themselves as finals contenders a win will be crucial for both sides.

The Hurricanes are coming off a nail biting last ball victory to the Brisbane Heat on Wednesday night, despite never really looking on there game. The Hurricanes struggle to negate the leg spin of Mujeeb Ur Rahman and with suspension of Adam Zampa for the Stars in this game they should get a bit more of a reprieve on Saturday night. With Dawid Malan making a decent contribution with the bat against the Heat, and Tim David showing that he is fast becoming one of the competitions best finishers towards the back end of an innings the Hurricanes look to push on towards a finals berth.

The Stars on the other hand will be licking their wounds after getting trounced by the Sydney Thunder by 75 runs after conceding 7/219. The Stars were never in the hunt in the chase with their top order never really threatening to chase down the target despite their star studded batting lineup. As mentioned the Stars will be without their star leg spinner Adam Zampa due to suspension which leaves an already depleted bowling attack looking a bit thin against this Hurricanes team.

In our opinion the market has got this wrong with the Hurricanes looking value against the Melbourne Stars. With a batting lineup of Short, McDermott, Malan, Ingram and Handscomb up against an inexperienced bowling attack the Stars will have, the Stars may struggle to keep such a powerful lineup quiet. If the Hurricanes bat first a big total could be on the cards, but we’re also backing the fact that they can get the job done chasing whatever the Stars set.

He’s the number one Twenty20 batsman in the world for a reason, the bloke is an out and out star. He averages 31 with the bat in the format and has 39 scores of over 50 in Twenty20 cricket. With scores of 15 and 39 against the Heat over the past week since coming out of quarantine, we’re backing the fact the Englishman can build on his first two efforts and raise the bat on Saturday night.

The Stars have got themselves one here in the West Indian star Nicholas Pooran. With scores of 65 against the Sixers and 6 against the Thunder when chasing the mammoth total the Thunder set. He averages a tick over 25 in T20’s and we’re backing him to do a job for the Stars in the middle order against this handy bowling attack.