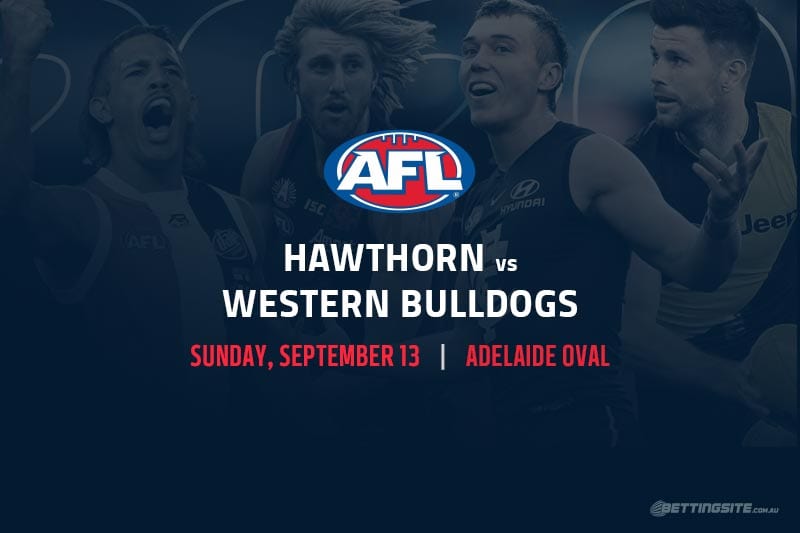 The mission is simple for the Western Bulldogs this Sunday: beat Hawthorn at Adelaide Oval and head into round 18 with a real chance of making the AFL 2020 finals.

Alastair Clarkson’s Hawks failed to make South Australia their home away from home in rounds 13 to 15, losing three matches including the blown lead against Essendon and their diabolical loss to Adelaide.

The Bulldogs have been blessed with several second chances this season, as the GWS Giants lost to the Crows and St Kilda coughed up yet another lead to leave a spot in the eight up for grabs.

James Worpel and Isaac Smith were both ruled out for Hawthorn during the week, while Jaeger O’Meara is a chance to return from his broken hand and Jon Patton should be good to go following a minor foot issue.

With Easton Wood expected to return on Sunday, the Bulldogs are close to full strength with only four players on the injury list.

The Hawks have won two of their last three clashes with the Doggies, but it would take a huge effort from their developing squad to win this one.

The win over West Coast saw Josh Dunkley record his first 20-disposal game since returning from his syndesmosis injury. The Bulldogs had been using the big-bodied midfielder as an auxiliary ruckman, but he spent more time as a genuine on-baller against the Eagles. Dunkley should eclipse 20 disposals once more if he plays the same role against the Hawks.

A goalkicking revelation for the Bulldogs in 2020, Mitch Wallis has transitioned marvellously into a full-time forward. Wallis has always been a great goalkicker out of the midfield against the Hawks, slotting five goals in his last three matches against them. With Aaron Naughton drawing all the attention, Wallis will use his footy smarts and reliable finishing to kick a couple of goals.

Percentage is critical as the home-and-away season comes to a close. The Doggies are level on points with the Giants and only 1.0 percent short of sitting above them in the eight. We can expect a ruthless and malicious Bulldogs outfit this Sunday against the Hawks, who have lost six straight games since their bye in round 10.