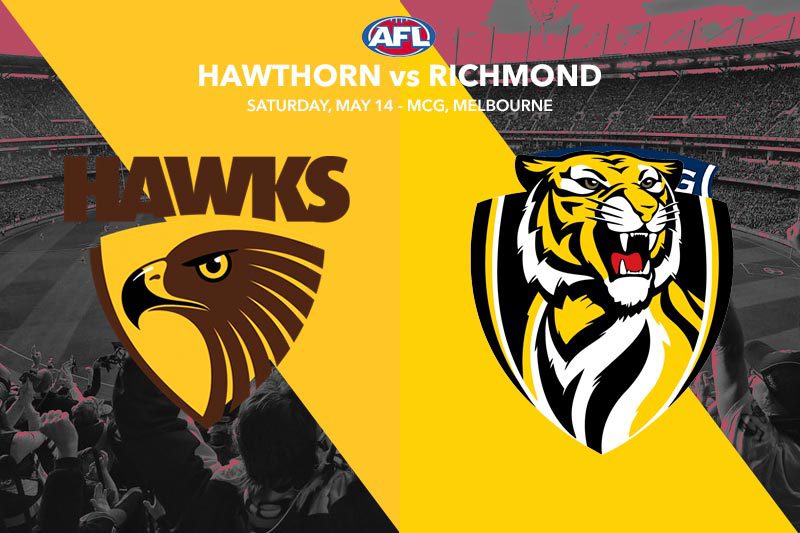 Can Hawthorn arrest their slide against Richmond in round nine at the MCG following their surprise loss in round eight?

The Hawks let one slip against the Bombers and have now lost three on the trot following their upset win against Geelong. This would suggest there is a psychological component to their bad run. They were able to get up for the Cats game, which is essentially a derby, but have been unable to find the same intensity for normal games. The loss to the Bombers will sting and was undoubtedly pencilled in as a likely win by Hawthorn personnel. The young side now face a test of character against the surging Tigers.

We’ve been bullish about the Tigers all season, even without some of their superstars, and gladly took them at the line in round eight. The 27-point victory against the Pies catapulted the Tigers into the top eight, and with Dustin Martin back doing his thing, the rest of the comp is now on notice. Martin booted two goals, grabbed 23 possessions, and demonstrated how much the rest of the team feed off his hulking presence. Big Tom Lynch stepped up and booted six, with Riewoldt acting as his decoy, and Richmond look like a well-balanced side set for a deep run.

The obvious key matchup here is Dustin Martin versus whoever the Hawks throw at him. Martin has the physical strength to shrug defenders at will, so who will it be? Hawthorn midfielder Tom Mitchell had a forgettable game against the Bombers, grabbing a mere 14 disposals without hitting the scoreboard. He’s still averaging 25.9 disposals and four tackles a game for the season, but he’ll need to have a big one if the Hawks are going to be competitive here.

The early line was set at an irresistible 12.5 points, and guess what, punters? We stepped up and took it… again. That has now drifted to 15.5 points, but still looks good. After tipping 4/4 in round eight, our bankroll is swollen and heavy, and we are ready to throw that weight around. When a hot team meets a cold team and the market gives you a free swing, you just take it. Richmond -15.5 points might seem like another dose of free money when the rampaging Tigers are 36 points clear in the third quarter and the Hawks are having a quiet little sulk.

For fellow cashed-up punters who just are always on the lookout for a little more, we will construct a multi with some juicy upside. We will take Richmond -15.5, into Shai Bolton 20+ disposals, into Jack Riewoldt 2+ goals. This will return $3.77 courtesy of Ladbrokes. Bolton and Riewoldt should both benefit from the defensive attention paid to Martin.