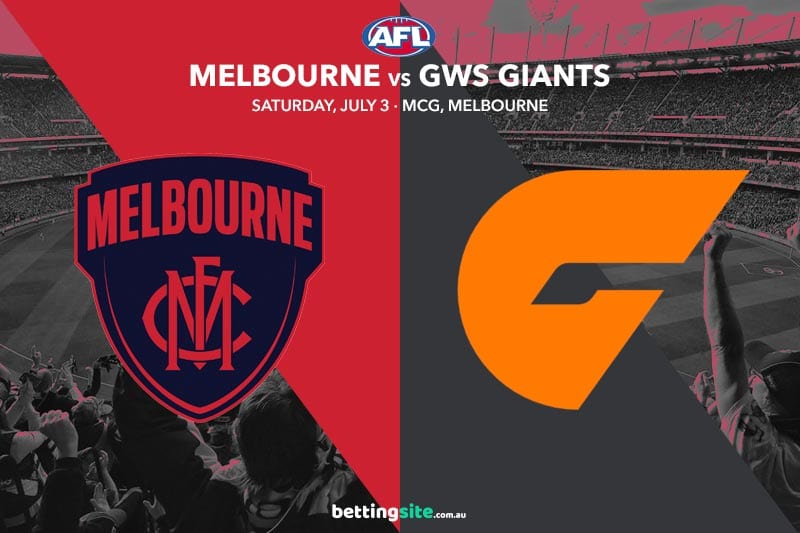 The GWS Giants will be playing to keep their AFL finals hopes alive this Saturday when they head to the MCG to face the ladder-leading Melbourne Demons in round 16.

Leon Cameron’s men must respond this week after a shocking loss to Hawthorn last round, while the Demons fell over the line against Essendon in their 11-point victory on Saturday night.

Neither side suffered any injuries during last weekend’s proceedings, but a few familiar faces could return for both teams. Ben Brown is likely to join the Demons’ forward line after kicking five goals in the VFL, while Shane Mumford, Stephen Coniglio and Jesse Hogan are progressing well for the Giants.

The Demons have won their last two matches against the Giants, but their most recent clash at the MCG resulted in a 26-point win for GWS back in 2019.

These teams have met at the MCG six times since the Giants joined the AFL in 2011, and five of those matches surpassed this weekend’s line of 154.5 for total match points. Online bookmakers have wound down that line due to the forecast, with a wet night expected in Melbourne.

Sloppy conditions lead to more stoppages, which allows the ruckmen more opportunities around the ground. Max Gawn could have his hands full if the Giants bring back Shane Mumford, who loves to throw his big frame around in the wet.

It did not matter who played on Toby Greene back in round three, as the dynamic forward kicked a bag of five goals despite the Dees running away with a 38-point victory. Michael Hibberd could be tasked with marking up on the GWS superstar this Saturday, or a combination of Jake Lever and Steven May could be used to take away his aerial presence. We do not think any of the Melbourne defenders can effectively quell Greene, who is paying $4 at Sportsbet.com.au to finish the day with three or more goals.

The best value for this match lies with the Giants at the line, which is sitting at a generous 30.5 points. The Dees only beat the Bombers by 11 points last week and lost to the Magpies before the bye. The Giants will fall out of the finals race if they lose this match, which should be enough motivation for them to give it a real shake this weekend.

Max Gawn to get 20+ disposals

The Melbourne Demons skipper has been outstanding this season in the ruck, but we think his ability to accumulate disposals is underrated. Max Gawn glides across the ground thanks to his impressive endurance, while he has been taking possession out of the ruck more often this year. Gawn amassed 25 and 24 touches in his last two full-length games against the Giants, and he should post similar numbers again this weekend.

We are backing Toby Greene to kick two or more goals as the Giants to cover the line this Saturday afternoon. Max Gawn will collect his share of disposals in the ruck, while the total score should tick over 154.5 points. Combine those four legs for a $13.50 return with Sportsbet.