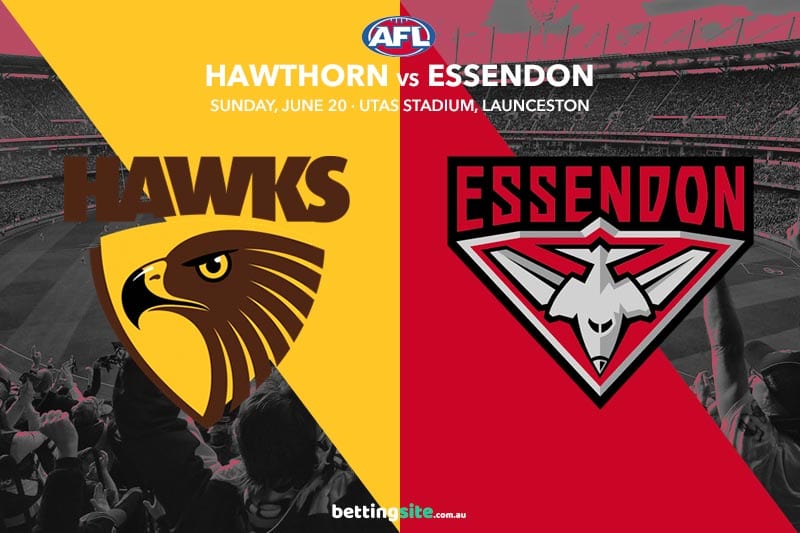 The Hawthorn Hawks and Essendon Bombers will clash for the second time of the 2021 AFL Premiership season this Sunday at the University of Tasmania Stadium.

Their first clash back in round one was a nail-biter, with the Hawks securing the one-point win after clawing back from a 39-point deficit.

The decision to move the game to Tasmania will suit Hawthorn, which has a long association with the Apple Isle, although the Bombers have proven they can win on the road this season.

James Worpel has accepted his one-match suspension and will miss this week, while Harry Morrison is out with a hamstring issue. James Cousins has come in to replace Morrison, while a host of others could also join the squad.

The Bombers have made a handful of changes to their 22, bringing in Sam Draper, Devon Smith, Tom Cutler and Brandon Zerk-Thatcher all confirmed ins. Andrew McGrath (knee), Alec Waterman (calf) and David Zaharakis (hamstring) are out injured, while Aaron Francis (managed) and Patrick Ambrose (omitted) have also dropped out of the side that lost to Richmond in round 12.

Back in round one when these teams clashed at Marvel Stadium, the Bombers started strong before letting the Hawks back into the contest. Both sides have improved as the season has progressed, but the growth of young stars such as Nik Cox, Archie Perkins and Harrison Jones has lifted Essendon into genuine finals contention.

Finding value within this match isn’t easy, as the Hawks have utilised a spread of goalkickers and their accumulators are offering short odds in the disposal market. Dylan Moore has been the Hawks’ biggest improver this season with 15 goals from his 12 matches. You can find Moore at $2.40 with Sportsbet to kick two or more goals this Sunday.

Only 10 players in the AFL are averaging over 30 disposals per game this season, including both Tom Mitchell and Zach Merrett. Both all-magnets are in excellent form; Mitchell is coming off a 34-disposal effort against the Swans, while Merrett has racked up over 30 in each of his last three matches. If one of them is kept quiet – or quieter than usual – it could have a big impact on the outcome.

Ben Rutten’s men have had an extra week to prepare for Hawthorn given they are coming off the bye, and we think they will redeem themselves for their early-season mistakes. The Hawks were strong against the Swans last week, but they may struggle without James Worpel in the middle. This could be one of the closest matches of the round, and we see the Bombers coming out on top.

Brayden Ham to get 15+ disposals

The Bombers have named Brayden Ham in the midfield, where he will fill in for the injured Andrew McGrath. Ham has collected 15 or more disposals in six of his last 10 matches this season, which includes a career-high 25 touches against St Kilda back in round three. Ham had 17 touches against the Hawks in round one and should reach that mark again this Sunday.

The Bombers are our tip to win this Sunday’s contest in Launceston. We see Brayden Ham spending more time in the midfield this week and collecting at least 15 disposals, while Dylan Moore should have enough opportunities to kick multiple goals for the Hawks.