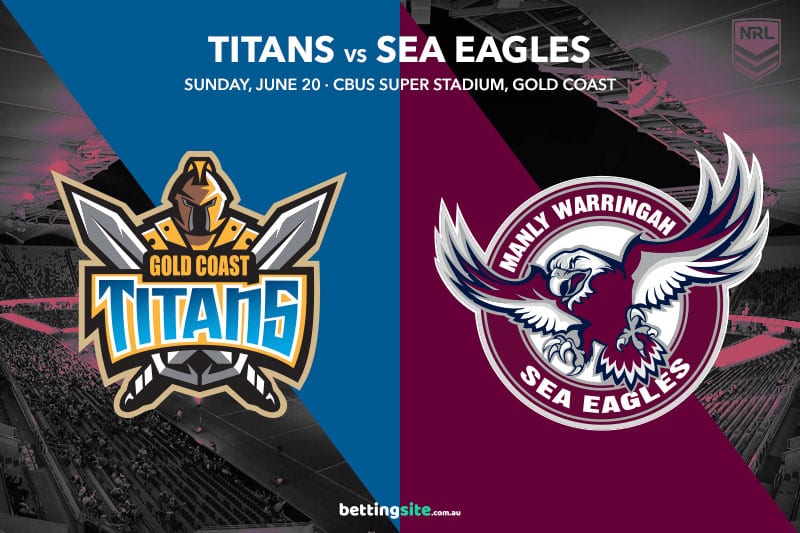 High-flying Manly-Warringah Sea Eagles are hunting their second win over the Gold Coast Titans for the NRL season in Sunday’s twilight fixture.

A heartbreaking loss for the Titans at home last round makes this game almost a must win if they want to keep their season alive. But they face an opponent that have won four of their last five games at Robina.

As good as Reuben Garrick was at fullback last week in a huge win over the Cowboys, Tom Trbojevic will make his return and make the job at hand for the Titans even harder.

Manly’s away record in 2021 is a mediocre 3-4, but a win in this round 15 fixture could kick start a run with a soft month of football coming up.

Gold Coast looked like the best and worst team in the space of one afternoon last Saturday against the Roosters, but if they can start against Manly the way they finished last weekend, this contest will be anything but straight-forward.

Two big boppers are normally a key match up because fans love the physicality they bring, but in the case of Jarrod Wallace and Martin Taupau, their willingness to use the football and the success it usually provides for their team makes this head-to-head battle crucial. Taupau is almost always passing post-contact and becomes dynamic when he doesn’t die with the football, while Wallace has shown he can be a terrific pre-line passer and has created plenty of space for his teammates in 2021.

The Titans are a team that can score 30 points unanswered and concede 30 unanswered? Their 2021 season has been a series of rollercoaster rides not too dissimilar to the ones you’d find at Movie World, so is there any way we can predict where the points come with any rhyme or reason?

One player who starred last week and is still good value is Tyrone Peachey to cross at any time paying $3.60. If the conditions suit, it could be another high-scoring game and it is those games where Peachey comes into his own.

David Fifita is overdue and in somewhat of a try scoring drought, so perhaps he could be one to look out for at $2.70?

The +6.5 start is a tricky one to predict when you look at the Gold Coast’s performance from last week. A 15-minute period had them transform embarrassing home loss to being on the verge of a record comeback. Safest option is to avoid trying to pick them at the line.

The Sea Eagles away record is surprisingly not that good this year, but this feels like a game where there is expectation for them to perform well away from their traditional home at Brookvale.

The -6.5 start is probably the best way to go and the over 50.5 points is also the way punters should be looking — plenty of tries are going to be scored.

Tom Trbojevic seems to score for fun, with eight in seven games for Manly and a hat-trick in Origin I, so he is an absolute must in your multis.

Jason Saab and Reuben Garrick are also enjoying life without Trbojevic, so make sure they’re included.

Brad Parker at $14 offers a nice return in the first try scorer’s market, but the $20 for Morgan Harper might be worth considering. He is opposite Brian Kelly, who is having a difficult time in recent weeks defensively, so Manly might hunt points down that side of the field.

Manly comfortably cover the -6.5 line and you’ll see Tommy Turbo, Garrick and Saab all score as the Sea Eagles rack up another big score. The Titans will be left soul-searching, four points outside of the eight and scratching their heads at ‘what might have been’ for season 2021.