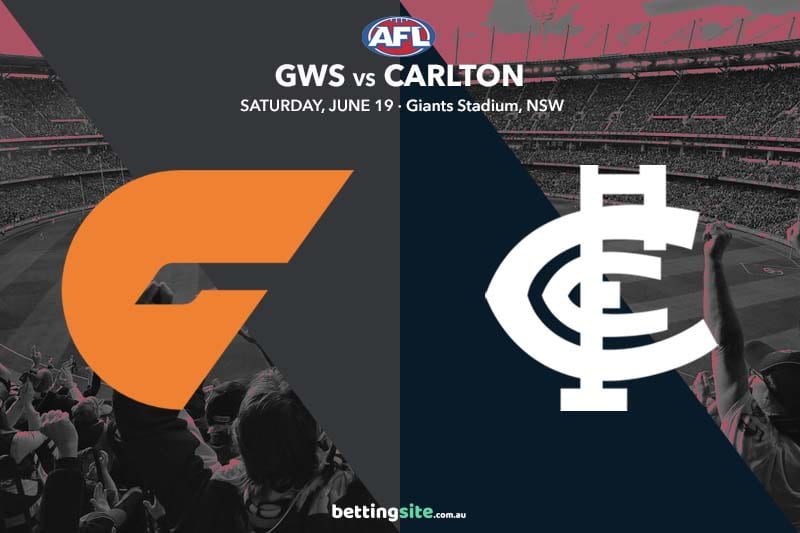 Can the Carlton Blues keep their finals dreams alive this Saturday night when they face GWS at Giants Stadium in round 14 of the AFL Premiership season?

David Teague has been under the spotlight in recent weeks, as the Blues have won just one of their last five contests and are quickly falling down the ladder.

The Giants managed to escape with a draw against North Melbourne despite a horrible start to the match, but they will need to play much better football in order to defeat the Blues this week.

Lachie Fogarty, Matthew Kennedy and Luke Parks make their returns for Carlton this week, as Matthew Cottrell, Marc Murphy and Will Setterfield fall out of the squad.

The Giants welcome back two crucial players in Phil Davis and Harry Perryman, while Kieren Briggs comes in to replace the injured Shane Mumford. Lachie Ash, Xavier O’Halloran and Jake Stein did not do enough last week to hold their spots in the side.

The Giants’ squad is starting to look stronger each week as more senior players return from injury, with Phil Davis and Harry Perryman the latest stars to come back. Harry McKay and Nick Newman suffered concussions in round 12, but they are all-clear to play since Carlton had the bye last week.

Toby Greene is the most dangerous player on the ground this week, as his unpredictability and supreme talent will be a nightmare for any Carlton defender. Greene has been very inaccurate in front of the goals this season, kicking 23.27 from 10 matches. We believe Toby will straighten up his kicking this week and is worth at look at $2.88 to slot three goals with Sportsbet.

No GWS player has found more of the footy against Carlton in the last four years than Josh Kelly, who is averaging 35 disposals from his last three outings against the Blues. It will be up to Sam Walsh to stop the GWS ball-magnet, as the young star will spend more time on the wing this weekend. Both running-machines are excellent disposal market options.

Although they were not impressive against North Melbourne last week, we think the Giants are going to play one of their best matches of the season. GWS has won four of the last five contests against Carlton, including a 93-point demolition at Giants Stadium in 2019. The Teague Train will be derailed this Saturday night as the Giants edge closer towards the top eight.

Josh Kelly to get 30+ disposals

After a poor start to the season from the 2017 All-Australian, Josh Kelly exploded with 39 disposals against the Kangaroos last week. Although he has only surpassed the 30-mark twice this season, we think he provides great value in this contest. Kelly has averaged 29.4 disposals from his last five contests, while he should thrive on the Giants’ home deck.

It is all Orange and Charcoal this Saturday night as we suspect the Giants will knock off the Blues. Josh Kelly will be back to his best in the midfield, while Greene should cause havoc up forward. The Giants will respond this week after a disappointing performance in round 13. Combine these three legs for an $11.75 multi at Sportsbet.com.au.