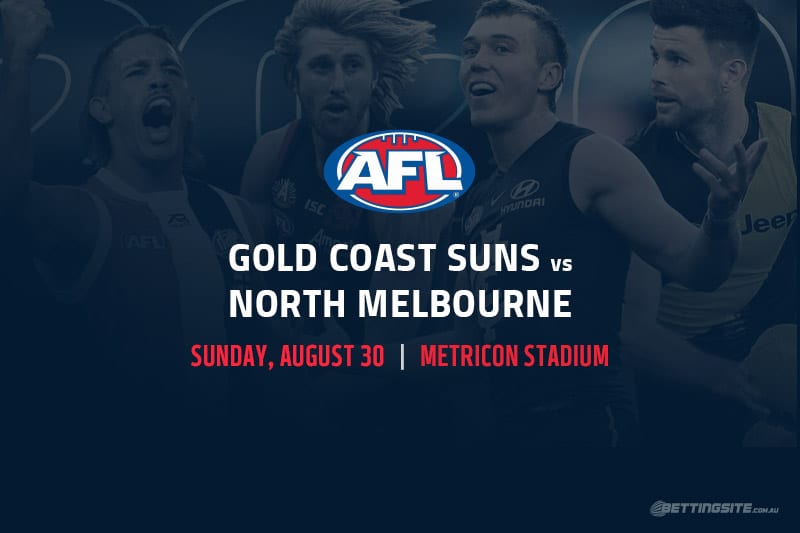 Round 14 of the 2020 AFL season comes to a close as the 14th-placed Gold Coast Suns host the 17th-placed North Melbourne on Sunday night.

The Suns will be looking to pick up their first win since round seven, while the Roos will be aiming to snap a four-game losing streak.

Gold Coast have been competitive despite their recent record, although they were lifeless against Carlton last time out and looked like they needed the nine-day break they’ve just had.

North Melbourne were quite disappointing on Monday night against Collingwood after taking the Brisbane Lions all the way to the final siren the week before.

Despite the Suns going winless since round seven, this looks the perfect matchup for them to turn their form around. After a poor showing in Darwin last Friday night against the Blues, Stuart Dew’s side will have benefited from their extended break and may prove too classy across the board for North Melbourne. In what is likely to be a low-scoring match, the Suns may have too many answers up forward with the likes of Rankine, King and Day looking to bounce back from below-par performances.

Sam Day is finally getting the fair crack at senior footy he has been striving for. Despite not hitting the scoreboard as much as he may have wanted to so far, he has played a major role in the emergence of Ben King by clearing out the forward 50 and letting the young star ply his trade. It may seem risky to pick a player who has not kicked a goal in his last two games, but Day has been crucial whenever the Suns have managed a result this season.

Brandon Ellis has settled in seamlessly his first year on the Gold Coast. The former Tiger has proved to be vital in the impressive efforts the Suns have put forward, adding some premiership-winning experience to the young midfield. Ellis’ average of 18 disposals per game makes this a decent addition to any same-game multi, while he also a knack for sneaking forward and hitting the scoreboard in big games like he did against his former club two weeks ago.