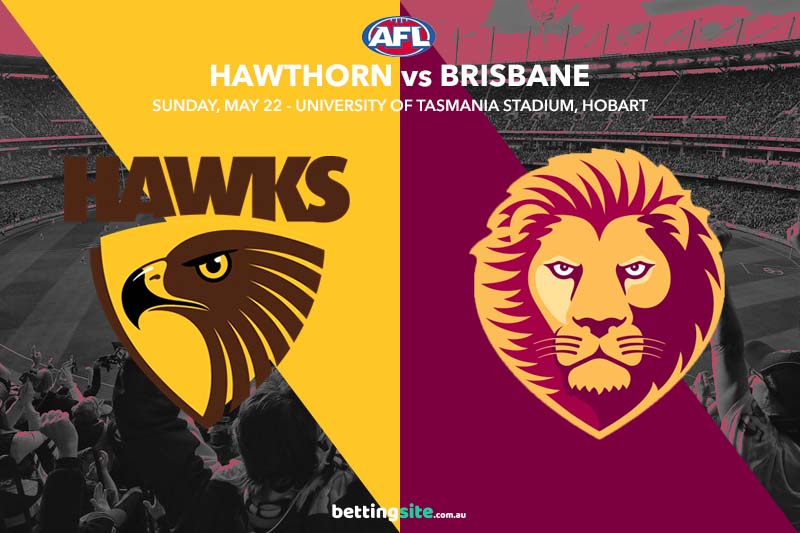 The Hawthorn Hawks will look to snap their four-game losing streak in round 10 of the AFL season this Sunday in Launceston against the red-hot Brisbane Lions.

Only the Melbourne Demons stand above the Brisbane Lions on the ladder, while they are also the only team with a longer winning streak, as the Lions have won five matches on the trot.

Just as the Hawks were beginning to fill their fans with hope for the season, the young squad is starting to struggle late in quarters, resulting in their recent four consecutive losses.

This will be the Hawthorn Hawks’ second game down in Tasmania this year, and they will hope to produce a better performance this time around following their 41-point loss to the Swans in round six.

A few additions to the squad will give Sam Mitchell and his men a big boost, notably the return of Tom Mitchell to midfield and Changkuoth Jiath to the backline.

Jack Gunston will make way alongside James Worpel and a pair of youngsters in Finn Maginness and Connor McDonald, while the Lions will lose Marcus Adams to the Health and Safety protocols.

The online bookmakers may have strong ties to the Lions this Sunday, but you have to keep the Hawks in mind considering they beat Brisbane late last season at this week’s same venue.

Not only has Jai Newcombe flown into Rising Star contentions, the Hawks youngster is quickly becoming a genuine threat in a growing midfield. Newcombe has the size and strength to match his veteran opposition, but he is still finding a way to improve week after week.

Jarryd Lyons is one of the best pound-for-pound inside-midfielders in the competition, and we think he needs to stand up for the Lions this week in enemy territory. Lyons is as tough as they come, but he also knows how to carefully work his way around opposition setups, as he has intelligence to match his bulk. It will be interesting to see how the young bull and seasoned star match up this Sunday.

Hawthorn Hawks +20.5
The last month of football has been tough for the Hawks and their fans alike, but we think there will be plenty of positives to take out of Sunday’s bout. The unique home-field advantage at UTAS is not to be underestimated, which is exactly what the Lions did back in round 20 last season. Tom Mitchell should give the Hawks a big boost after his week off, while Jiath’s inclusion provides some much-needed run out of the back half.

Jarryd Lyons to get 30+ disposals
You do not need to look far to find Jarryd Lyon’s last big game, as the consistent three-club veteran is more than capable of putting together a big performance. Lyons was exceptional in his last clash against the Hawks, who he dominated for an entire afternoon and finished with 38 disposals a goal and three Brownlow Medal votes. Book in Lyons to repeat last season’s efforts this Sunday in Tasmania.

James Sicily has been on fire for the last month and should keep his great momentum flowing for another week, which should be enough for the Hawks to hold the line. Jarryd Lyons will still bash and crash his way to at least 30 touches, but will that be enough to down the Hawks?