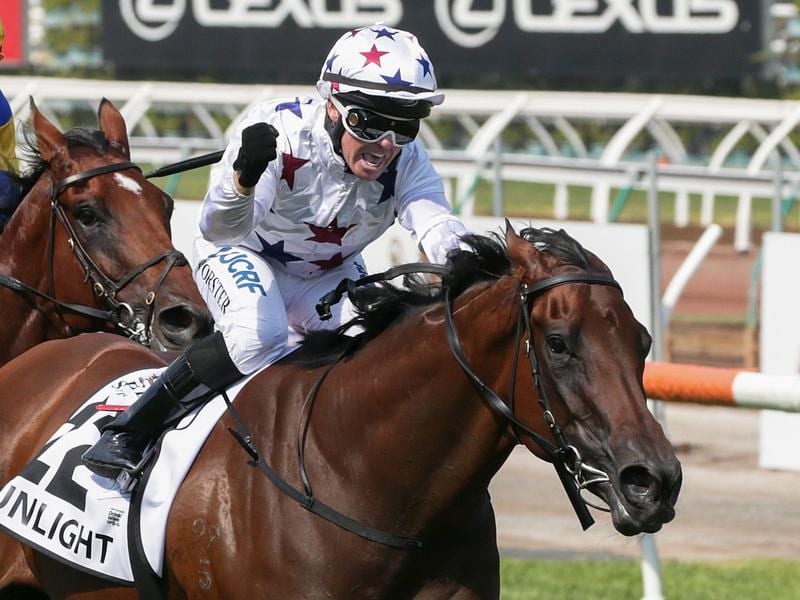 Sunlight is primed for the Gilgai Stakes at Flemington, her lead-up to teh $14 million Everest.

A change in plans for two Everest contenders has led to the Group Two Gilgai Stakes at Flemington shaping as an important pointer to the $14 million sprint in Sydney.

Heavy rain in the lead-up to The Shorts at Randwick two weeks ago prompted connections of both Santa Ana Lane and Sunlight to bypass that race and readjust their respective Everest preparations.

Sunlight was in Sydney but was sent back to Melbourne by co-trainer Tony McEvoy and the mare finished third in last Friday night’s $1 million Moir Stakes.

Instead of resuming in The Shorts and having a month between runs into The Everest (1200m) on October 19, the Anthony Freedman-trained Santa Ana Lane was kept in Melbourne and returns in the Gilgai before making a hit-and-run mission to Sydney for The Everest.

Both have Group One wins over the straight 1200m at Flemington and the race-fit Sunlight ($2.70) was shading Santa Ana Lane ($2.80) for Gilgai favouritism on Friday.

McEvoy admits it will be a good Everest test for Sunlight against five-time Group One winner Santa Ana Lane.

“But my expectations are high,” McEvoy said.

“She’s in great shape. She has never let us down, really. So I’m looking forward to Saturday.”

Sunlight hit the line strongly for third to Nature Strip in the Moir over 1000m and McEvoy said the four-year-old had come out of it in great order.

“She’s very bright and well and she hasn’t left an oat,” McEvoy said.

“She was incredible in the Moir. When they are under that much pressure that far out and still nearly win, just shows that they’ve got a lot of class and they’re going very well.

“I think she’s going as good as ever and I couldn’t be more pleased with her.

“She’s physically taken a lot of benefit out of last week, I can assure you.”

Connections of Santa Ana Lane believe he is forward enough to run a bold race before his main target in two weeks.

Santa Ana Lane is on the second line of betting for The Everest at $6 while Sunlight is at $15.