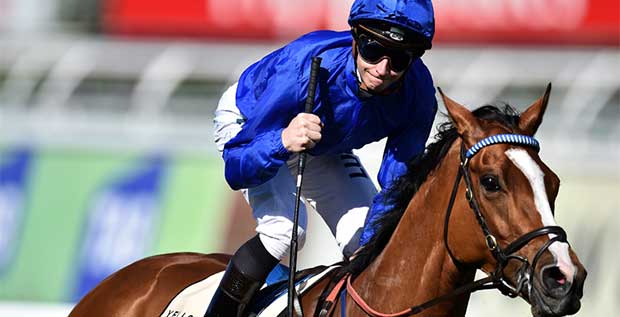 GODOLPHIN superstar Hartnell may be just days away from a glorified match race against Winx in Saturday’s Cox Plate, but the bookies are already predicting the English import could jump in the Melbourne Cup as the shortest-priced favourite in decades.

The six-year-old Hartnell is the +220 second favourite to star mare Winx ($1.90) in Saturday’s Group 1, but one bookmaker went as far as to say the gelding could jump as “a $2.70 or $2.80 favourite” going into the world’s richest staying race if he can salute at Moonee Valley.

If Hartnell was to come in under the $3 mark it would go off as the shortest price starter since Bart Cumming’s trained So You Think was beaten in the 2010 Melbourne Cup.

Hartnell drew barrier seven for Saturday’s Cox Plate at Moonee Valley, a gate that suits the gelding ideally according to trainer John O’Shea.

“It’s better for us to draw there. If we’d have drawn one, two or three, it’ll have been difficult,” O’Shea said.

“I like where he’s drawn – it allows him some galloping room … each week we’ve worked him in Melbourne, he looks to have improved. This week’s been no different.

“If you watch last week in the Turnbull, James [McDonald] was able to let him roll along a little bit in the first couple of furlongs, get him into a nice rhythm.

“From gate seven, we don’t have to be bustling; we can take our time and have a similar approach.”

Sportsbet.com.au currently has Hartnell as the +400 favourite for the Melbourne Cup, but representative Will Byrne believes he will tighten even further heading into November.

“He’s (Hartnell) attracted twice as much money as any other runner in the Melbourne Cup and if he wins or runs a close second to Winx we’d expect him to shorten into around $3 in the Cup,” Sportsbet’s Will Byrne said.

“We have had a lot of Jameka-Hartnell doubles in the Caulfield Cup-Melbourne Cup multis and if he can do the Cox Plate-Melbourne Cup double it will be a bad result for us.”

Crownbet.com.au representative Matt Campbell did not believe his company would wind Hartnell in as far as their competitors.

“If Hartnell wins the Cox Plate and decides to run in the Melbourne Cup we think his price will be around the $4 mark,” Campbell said.