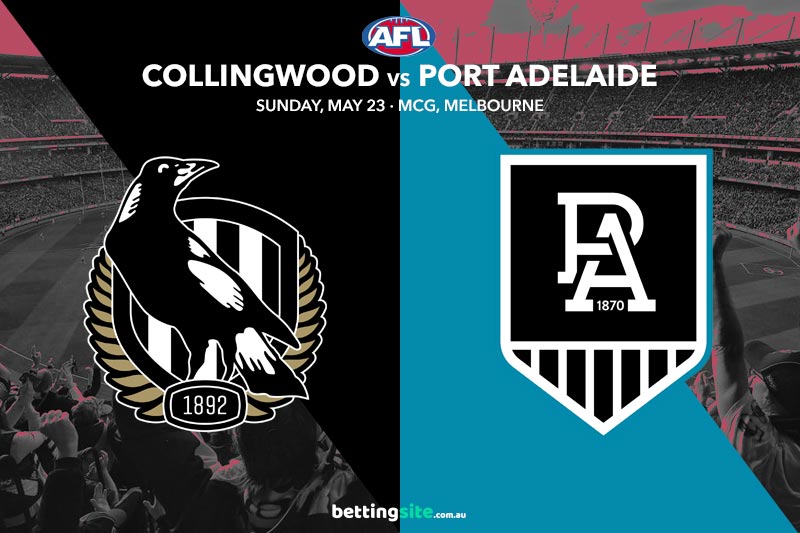 The Port Adelaide Power will look to get back in the winners’ circle when they travel to the MCG this Sunday to face the Collingwood Magpies in round 10 of the 2021 AFL Premiership season.

Nathan Buckley and the Magpies continue to feel the heat after another disappointing loss, while Ken Hinkley’s Power have only beaten one team in their last three matches.

The Pies built an 18-point quarter-time lead against the Swans last week, but they ran out of legs as the game progressed.

Port Adelaide should welcome back Dan Houston from an AC joint injury but must replace key defender Tom Clurey, who suffered a broken jaw against the Bulldogs last week.

Despite sitting 16th on the AFL ladder with just two wins for the season, the Pies are yet to lose a match by more than 30 points. The Power have beaten the Magpies in three of their last five encounters, but none of the margins in those wins have gone beyond 40 points. Taking the Power by 1-39 provides great value at $2.10 with Sportsbet.com.au.

Excluding last season’s clash in shortened game-time, the Magpies and Power have racked up 155 or more total points in each of their last six meetings. The conditions will be perfect at the MCG, allowing both sides to utilise the wide boundaries and open up the entire ground, so the overs could be the go.

The ever-reliable Travis Boak has been fantastic for the Power this season, averaging 28 disposals per game at 32 years of age. Josh Daicos moved into the Collingwood midfield back in round six and has not taken a backward step, averaging 26 touches in his last four matches. Both Daicos and Boak have proven their consistency in the centre this season, making them players you should consider in the disposals market.

The defensive duo of Darcy Moore and Jordan Roughead has worked well for the Magpies in their last few contests against the Power. Charlie Dixon only kicked one goal in Port’s slim victory over the Pies last year as the small forwards did most of the damage. Moore and Roughead will help the Magpies keep this Sunday’s margin to a minimum.

Josh Daicos to get 25+ disposals

Josh Daicos has accumulated 25 or more disposals in three of his last four contests, posting 24 touches in the one game he missed out. The extended midfield minutes have been extraordinary for his numbers, and the $2 for Daicos to meet his four-week disposal average is a must-take.

A strong team performance from the Power should see them go home with the victory this Sunday, but the Pies will not go down without a fight. Josh Daicos will star in the middle for Collingwood in a high-scoring match that could be closer than most pundits expect.