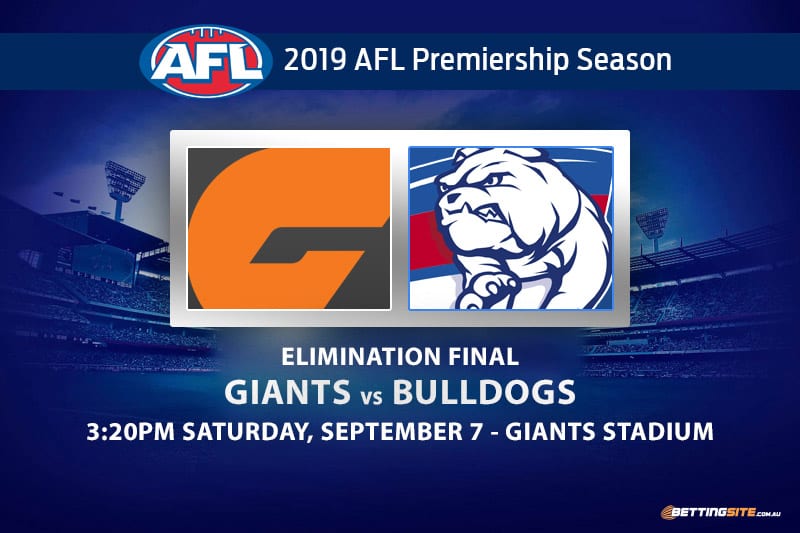 The Greater Western Sydney Giants and the Western Bulldogs will lock horns this Saturday afternoon in a do-or-die AFL finals clash.

Two of the most exciting teams in the league will enter Giants Stadium in the second elimination final of 2019, where the loser will not be seen until 2020.

The winner of this match will go on to battle the loser of the Brisbane Lions vs Richmond Tigers qualifying final.

No team has been as thrilling as the Bulldogs in the past three weeks of football, while the Giants were playing poorly until they faced the Gold Coast Suns in the last round.

In round 22 the Bulldogs beat the Giants by over 10 goals at the same stadium where this final is scheduled to take place.

The Giants have a much stronger team this time around, with Josh Kelly, Toby Greene, Nick Haynes and Jacob Hopper all critical inclusions.

Tory Dickson, who averages three goals per game in the finals, is pushing to return from a hamstring injury this week for the Dogs.

Lachie Whitfield to get 30 disposals @ $2 with Sportsbet
If not for a quad injury during the season, Lachie Whitfield would have been given his second All Australian blazer, as he continues to produce good games of football each week. When playing the Bulldogs, you need to deny their exits and win the ball outside the contest, which is Whitfield’s biggest strength.

Jack Macrae to get 35 disposals @ $1.72 with Sportsbet
No player has found the ball as often as Jack Macrae in the past month of football, with an average of 39.2 disposals in the past five matches, Macrae has peaked at the right time of the season. Given his recent form and how badly the Bulldogs want to impact in the finals, we think Macrae could even surpass 40 if he doesn’t get tagged.

Jeremy Finlayson to kick two goals @ $2.15 with BetEasy
Jeremy Cameron stole the show in round 23 after kicking nine goals and snatching the Coleman Medal out of Ben Brown’s arms. Jeremy Finlayson goes about his football in a much less arrogant way, kicking crucial goals and completing his role in the team. The Bulldogs have a very short backline that will suffer by the hands of Cameron and Finlayson.

Bailey Dale to kick three goals @ $2.50 with BetEasy
What Bailey Dale has achieved in the past six weeks has been brilliant. Coming into the side in round 18 with little-to-no expectations, Dale kicked five goals. Since round 18, Dale has kicked a total of 20 goals, making him one of the most dangerous forwards in the finals. Dale also signed a three-year contract extension at the kennel, relieving him of any previously harboured angst.

Either team by 16 points or less @ $2.55 with Bet365
Although the Bulldogs have won their last three matches by an average of 11 goals, this match will not be a walk in the park type of scenario. The Giants were previously overwhelmed by expectations, but now they are underdogs on their home deck, giving them nothing to lose. This final will be a close on until the final siren.

You cannot deny the Bulldogs of anything this past few weeks, climbing their way into the finals and doing so in unheard-of fashion, the Bulldogs must be considered as a threat to the Premiership.