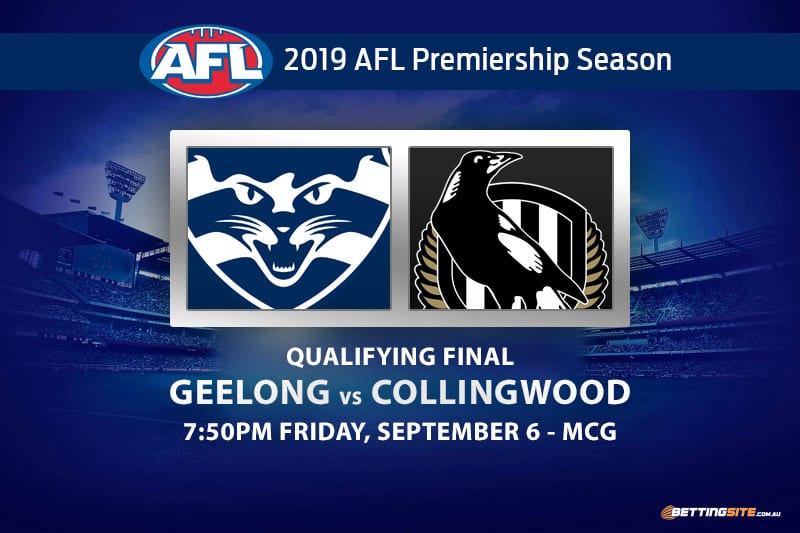 The Geelong Cats will face the Collingwood Magpies at the MCG in the biggest match of the 2019 AFL season to date.

This qualifying final will be a wet slugfest between two of the classiest teams in the league, exemplified by Scott Pendlebury in his 300th game for the Pies.

Winning this match will guarantee a preliminary final and provide another week’s rest, while the loser will have to take the long road through the semis.

Despite finishing on top of the ladder, the Cats will have to travel to their second home ground, the MCG, which happens to be the Magpies’ most preferred venue.

With no specific home-field advantage to either side, this game will be as evenly matched as any that has been played this season.

Due to the bye before the finals, the Magpies will have the opportunity to bring in a handful of important players, headlined with Steele Sidebottom, Jordan De Goey and Jaidyn Stephenson.

Geelong has the decision whether or not to bring in Sam Menegola after a blistering return to VFL footy, while Tom Atkins and Jake Kolodjashnij are also pushing to come back.

The Cats have won their past three matches against Collingwood with a good defensive style, but the Pies could expose Geelong’s recent deplorable record in the finals and after bye rounds.

Luke Dahlhaus to get 20 disposals @ $2 with Sportsbet
We made this same prediction in the first round of this season and Dahlhaus collected the ball 24 times. The former Dog has found the ball well against the Magpies in all his encounters with them, averaging more disposals against Collingwood than any other team. With the Magpies defence playing a very team-based style, a crafty individual like Dahlhaus will slip into dangerous positions and find plenty of the footy.

Taylor Adams to get 25 Disposals @ $1.67 with Sportsbet
There are only a handful of players in the AFL who improve in September, but Adams is one of the best performers in the finals compared to his output in the home-and-away season. His quality of disposal has improved each year, but the interrupted 2019 campaign has not allowed the hard-working Pie to find his best form. The Friday night atmosphere in front of 90,000-plus fans at the MCG is the big stage Adams needs to reach his peak.

Tom Hawkins to kick two goals @ $1.41 with BetEasy
Much to the disappointment of many AFL pundits, Hawkins was awarded with the All Australian full-forward position despite finishing sixth in the Coleman Medal race. The big Cat has been second to none when it comes to overall scoreboard output, however, kicking 52 goals while giving off the second-most goal assists (24) in the league. The Magpies will have to make a few decisions at selection, including whether or not to put Jordan Roughead back into defence and whether Darcy Moore is ready.

Jaidyn Stephenson to kick two goals @ $1.95 with BetEasy
Coming back from a 10-week suspension will not be easy, but the style of football that Stephenson plays suits the Pies perfectly. His speed out the back and innate awareness at ground level are well known, but his aerial work was starting to improve before the suspension. If the Cats play a very defensive style, you will still see some stoppage goals inside forward 50 for Collingwood, and that will bring crafty players like Stephenson into the game.

Total match points under 148.5 @ $1.91 with Bet365
The match points totals for the last three games between these teams have been extremely low. With the highest total being 137 in round one this season and the weather expected to be cold and wet on Friday, it is unlikely the game will produce more than 150 points. Geelong has played very poorly in previous finals matches after the bye, which must also be taken into consideration.

Given the constant conversations surrounding the venue of this match and Geelong’s post-bye record, which sits at 2-11 including finals, the underdogs are a real chance. Collingwood will get up thanks to an all-star midfield and the invaluable experience of last year’s finals campaign.