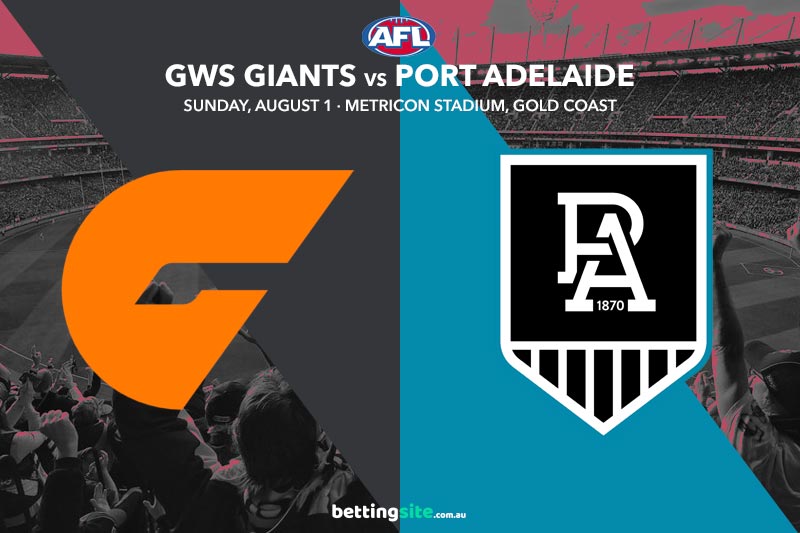 The GWS Giants will face the Port Adelaide Power on neutral territory at Metricon Stadium this Sunday afternoon as the 2021 AFL Premiership season continues.

This will be the sixth consecutive week the GWS players and coaches will be away from home, but they had enough in the tank to knock off the Bombers at Metricon Stadium in round 19.

Ken Hinkley’s Power secured a 28-point victory over the Magpies last week at the MCG, where Charlie Dixon flexed his muscles with four goals.

Both teams will welcome back talented small forwards this week, with Toby Greene returning for the Giants and Orazio Fantasia coming in for the Power.

Leon Cameron had planned on bringing back his skipper in Stephen Coniglio, but the GWS captain is unlikely to return this season from his recent toe injury.

The best asset for both teams this weekend is their midfield brigades. Josh Kelly and Travis Boak are classy kicks on the outside, while Jacob Hopper and Ollie Wines are two of the AFL’s best ball-winners in congestion. Both sides are capable of moving the ball quickly and scoring heavily from turnovers, so there will be a premium on execution of skills in this matchup.

Dan Houston and Harry Perryman are two important role-players for their sides, each averaging over 20 disposals per game. Both Houston and Perryman are coming off excellent performances in round 19, which has piqued our interest this week.

The most important matchup on the ground this Sunday will be Toby Greene against Darcy Byrne-Jones, as the winner of this bout could decide the match. No Giant has kicked more goals this season than Greene, who is one of the most dangerous forwards in the AFL when he gets off the leash. Byrne-Jones was rewarded with an All-Australian blazer in 2020 and is renowned for his ability to shut down small forwards. Greene has kicked a goal in each of his 14 matches this season, meaning DBJ will have his hands full this Sunday.

The Giants implemented a fantastic brand of football against Essendon last week, keeping the usually high-scoring Dons to just one goal in the second half. The return of Phil Davis and Sam Taylor has reinforced the GWS backline, which looks capable of cutting down Port Adelaide’s tall timber. With Toby Greene back in the mix up forward, we think the Giants will outmuscle the Power this Sunday.

Dan Houston to get 20+ disposals

Dan Houston has not had the most consistent season for the Power in 2021, but he has been very good against GWS in recent times. Houston has collected over 20 disposals in his last two encounters with the Giants, including 22 disposals in shortened game-time last season. Coming off a 21-disposal game against the Magpies, Houston has found form and should back up that effort this week.

Although the odds are against the Giants this Sunday, we think they will steal an important victory and strengthen their position inside the top eight. Dan Houston will collect another 20 touches, while Harry Perryman looks a good chance to surpass the 25-disposal mark for the seventh time this season.