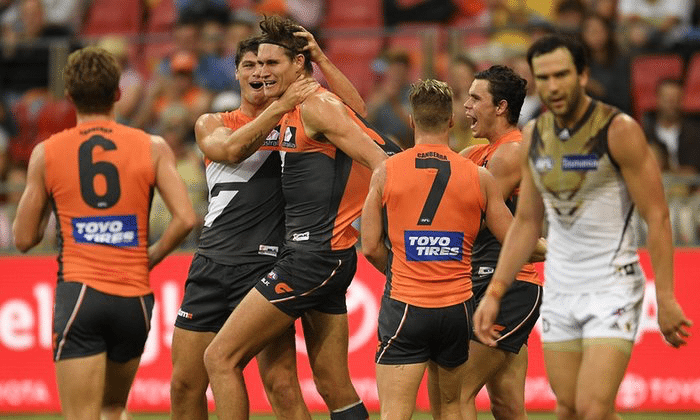 GREATER Western Sydney’s odds for the premiership have been slashed to $6 at WilliamHill.com.au after its ominous 42-point win over the one-time-flag-favourite, the Sydney Swans.

The Giants – who started the season as $51 outsiders at William Hill to win this year’s flag – have been building something special up in Western Sydney throughout 2016, but their win over the Swans ensures they will no longer fly under the radar.

The Giants’ Sunday afternoon coronation rubber-stamped their 2016 legitimacy after they outworked and outmuscled their cross-town rivals, who pride themselves on the contest area of their game.

Giants coach Leon Cameron said it was a watershed moment for the club both for the short and long term future.

“It was a really good day for our footy club, there’s been some ­really good victories in our short time, it was up there in the top three or four,” Cameron said.

“It is a significant day all round with the crowd, the win, the Swans supporters out and the Giants out, to have nearly 22,000 at Spotless Stadium is a significant achievement and they saw a good game of football.”

The defeat for Sydney was compounded further by the loss of ruckman Kurt Tippett, who is set to miss at least the next six weeks of football after suffering a high-end hamstring strain.

Despite the loss, the market has not lost market’s faith in John Longmire’s men, who are still the second most popular option at Sportsbet.com.au ($5.50).

The Sydney coach believes they have the depth to cover the injury of Tippett.

“The same was said about us at the start of the year when we lost (almost) a 1000 games of experience,” Longmire said.

“We were able to handle that pretty well. We believe we’ve got some players in the reserves who can come in who have been in good form for quite a while, they just need an opportunity.”

Both teams have a seven day break before their next set of matches.

The Swans will start as the $1.17 favourites against the Demons at the SCG while GWS’ odds are even shorter ($1.01) as they travel to Melbourne to face the bottom placed Bombers.

Danger favoured for the Brownlow, but is Hanners set to lead after 10?

GEELONG superstar Patrick Dangerfield’s odds for the Brownlow have tightened into $2.75 after his stellar 48-possesion game against North Melbourne on Saturday night.

The star import’s odds for the league best and fairest firmed from the $3.75 on offer prior to his side’s 31-point victory over the league leading Kangaroos.

Dangerfield put together arguably the finest game of his 172-game career, and even coach Chris Scott admitted he and his fellow coaches gushed over the former Crows’ impact.

“(The coaches) even commented a few times – some of the stuff in the contest,” he said.

“Seemingly the ball was just going to him one-on-one and he just looked like winning it every single time.

“The numbers were outstanding, but his work and his power to get out of traffic is pretty special to watch.”

Even though Dangerfield is one of the shortest-priced favourites at the midpoint of the season in the history of Brownlow betting, the 2015 All-Australian is not the favoured option to be leading the count after round 10.

Superstar Swan Daniel Hannebery ($3) is the favoured option at WilliamHill.com.au to be leading the Brownlow medal count at round 10.

Dangerfield is next best at $3.75, while Luke Parker and Bryce Gibbs – who are both at the $6 quote – are the only two other players under single figures.

LANCE Franklin’s quiet two week stretch in front of goal has seen the field tighten on the Swan superstar, who is now at $2 to win the 2016 Coleman medal.

The two-time winner of the award has been kept to just three goals in the last fortnight after averaging over four majors a game, taking his overall tally for the year to 43.

Buddy now sits just two clear of West Coast’s Josh Kennedy, who has firmed into $2.10 after being as long as $7.50 just three weeks ago.

The only other man in single figures is Gold Coast forward Tom Lynch ($6), who is just four goals behind Franklin.

Adelaide power forward Josh Jenkins continues to firm in the market after another big haul of goals over the weekend.

The former Essendon rookie is just six goals shy of Buddy’s total and is on the fourth line of betting at $13 after beginning the season as a $51 outsider for the Coleman.