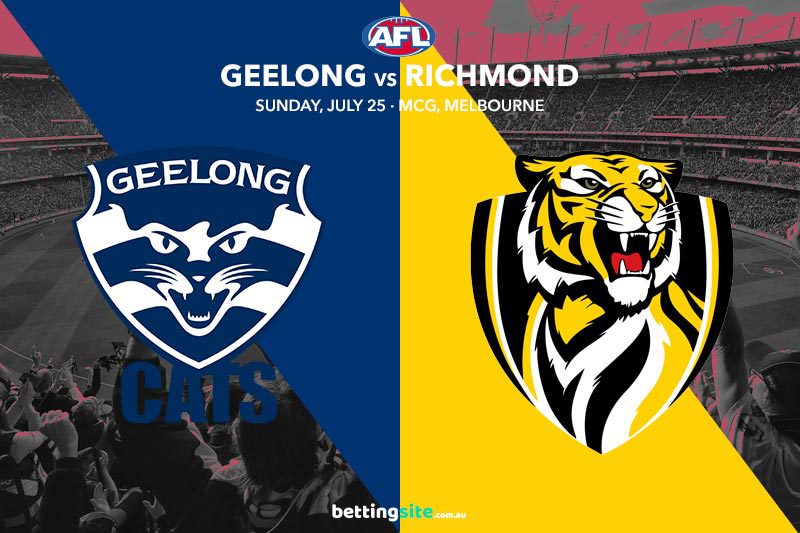 It’s a grand final rematch this Sunday afternoon as the Geelong Cats and Richmond Tigers face off in round 19 of the 2021 AFL Premiership season.

A lot of pressure will be on the Tigers this week, as they currently sit ninth on the AFL ladder and must win to stay in touch with the top eight.

With Dustin Martin (kidney) ruled out for the season and Kamdyn McIntosh hamstrung for the next fortnight, the Tigers are running thin in their midfield.

The return of Shane Edwards should help fix Richmond’s problems in the middle, while Riley Collier-Dawkins and Josh Caddy could also join the mix.

Lachie Henderson and Gary Rohan are Geelong’s likely inclusions after being managed in round 18, adding plenty of experience at both ends of the ground.

This will be the second time the Cats and Tigers face off this season, as they already clashed back in round eight. The Cats took an entire half to warm up, but they eventually found their form and smashed the Tigers by 63 points. The Tigers fielded one of their strongest teams of the season in that game, but six players from that side will not suit up this weekend.

Jeremy Cameron, Tom Hawkins and Gary Rohan combined for 15 goals in round eight for the Cats, but Cameron will not play this weekend. We think Hawkins and Rohan will still have a big impact, while another young forward should slip into the mix. Gryan Miers is clever around the goals and could kick a pair this weekend, especially if he plays on the inexperienced new-look Daniel Rioli.

Two of the most important players this weekend will be Tom Stewart and Jayden Short, as both teams rely on their half-backs to transition the footy out of defence. Stewart has an intercepting aspect to his game that is crucial for the Cats, while Short’s kicking expertise makes him a threat with ball in hand.

Both players will rack up plenty of disposals this weekend via handball receives and kicking out from full-back. You can back Stewart at $2 with Sportsbet to surpass the 25-disposal mark.

Geelong to win by 25+ points

Even though the Tigers won by 20 points against the Brisbane Lions in round 18, we think they will struggle immensely against Geelong at the MCG. The Cats will not allow the undermanned Tigers to put a dent in their premiership aspirations, and they will tear apart Richmond’s makeshift backline.

Gryan Miers plays the game differently to most forwards, using his high footy IQ to spot up teammates and find space. The Geelong gun has kicked 10 goals in his 10 matches this season, but we think his numbers will increase in the last few rounds of the home-and-away season. Miers kicked multiple goals against Richmond twice in his debut season, and he is a good chance to bob up for a couple this Sunday.

Just as the Cats did back in round eight, we think they will slaughter Richmond at the MCG this weekend. Gryan Miers and Tom Stewart will thrive at either end of the field as Geelong gets up by over 25 points.