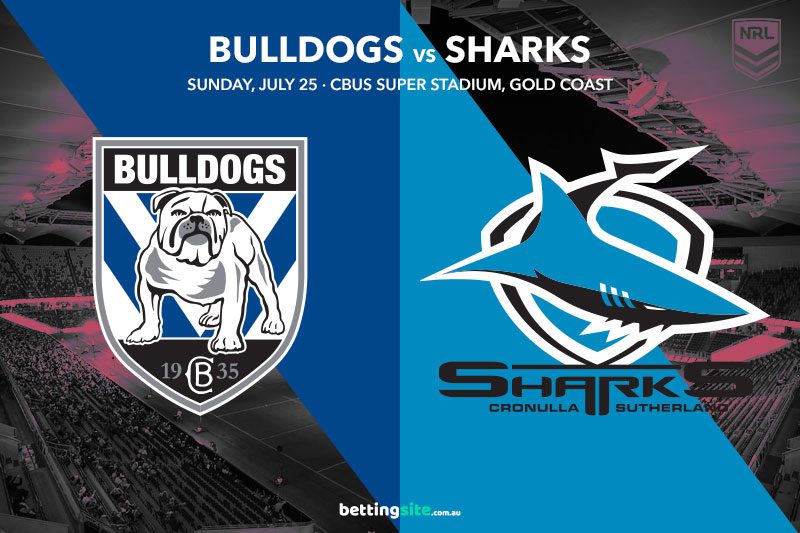 The final NRL game of Round 19 will see the Canterbury Bulldogs take on the Cronulla Sharks at Cbus Super Stadium in the prime-time slot on Sunday afternoon.

Cronulla have had the wheels fall off a promising season in the last three weeks by losing two games they should have handled comfortably, while the Bulldogs have impressed by pushing two star-studded teams right until the final whistle.

The Sharks have retained the same 17 who lost to the Raiders and are going to need Shaun Johnson to lift dramatically. The Kiwi superstar has produced a poor fortnight for the Sharks and is going to have to rediscover his best form to get his team over the line.

The Bulldogs have shown in the past fortnight the points are starting to become easier to manufacture, and that is going to put pressure on a Sharks side who find themselves in a must-win situation.

Cronulla have given up doubles to Tesi Niu, Matt Burton, Kalyn Ponga and Cody Walker this season, showing they have a tendency to be dominated by spine players whose best weapon is to run the ball when they aren’t at their best. It makes the $4.50 on offer for Jake Averillo to score a try at any time an absolute must-have, and the real risk-takers might want to have a lash at the $26 he is paying for a double.

The +10.5 line might be the most popular market for this game when you consider the Bulldogs’ last two performances. They may have lost but giving the Roosters and Rabbitohs all they can handle is a pretty good feather in the cap for a team who is running 16th and showing signs of improvement.

The Cronulla Sharks may be the $1.31 favourite for this game, but the memory of the dreadful Round 7 performance still lingers and shows how vulnerable they can be when they aren’t quite switched on. The difference between average teams and good teams are good teams find ways to win even when they aren’t quite at their best. Cronulla will have to be at their best and the -10.5 line is risky. Don’t go anywhere near it.

One market you may find a profit is the under 48.5 total points, as the Sharks have gone under the total points line in seven of their last nine games. Connor Tracey does have a try in three of his last four appearances for the Sharks, so you should see plenty of punters take the $2.10 he is paying to score a try. If you are a true believer and think the Sharks can get a win in a tight game, you can’t go past the 1-12 margin at $3.30. Their last three wins have all come by single digits.

Jake Averillo is starting to make the Bulldogs no.7 jersey his own and has done it largely off the back of his running game. He is undersized but is lightning off the mark, and the Sharks have been vulnerable in recent weeks to playmakers who love to run the ball. Shaun Johnson is the halfback on the other side of the field and every footy fan alive knows the talent he possesses, but he has gone missing badly in the last fortnight. This battle is a classic running halfback battle, and the man who challenges the line more frequently will get his team across the line.

This game is a hard one to pick a winner with any certainty, but the Bulldogs with the +10.5 line at $1.90 is where the money should be going. Expect a tight contest decided by a moment of magic. Just who produces it is an absolute mystery.

Bulldogs +10.5 with Jake Averillo, Connor Tracey and William Kennedy to all score a try pays a whopping $41.75, which is certain to cure the lockdown blues.