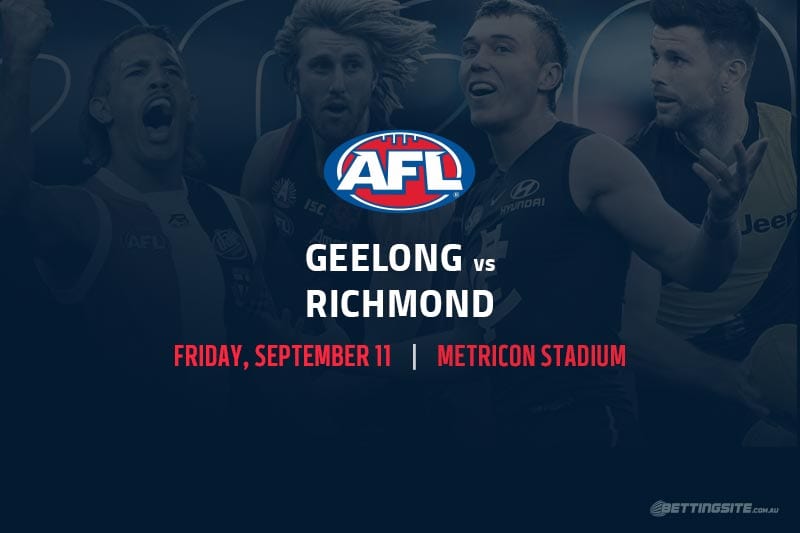 An outright AFL Premiership favourite will emerge this Friday night when the Geelong Cats and Richmond Tigers do battle at Metricon Stadium.

The Cats and Tigers share the top line of flag betting at $4.50 with Sportsbet, making this clash a possible AFL Grand Final preview in the second-last round of the season.

Geelong will take plenty of confidence from last Sunday’s demolition of Essendon, but the Richmond squad might not be in such a good mood given the controversy surrounding Sydney Stack and Callum Coleman-Jones.

Damian Hardwick’s Tigers won’t let adversity upset them when a spot in the top four is on the line, while the Cats are looking to steal the minor premiership from current leaders Port Adelaide.

Zach Tuohy will come in for his 200th career game and Joel Selwood is a chance, while Dylan Grimes and Kane Lambert will return for the Tigers.

Chris Scott has managed Patrick Dangerfield’s workload by sending him into the forward line on a regular basis. The 2016 Brownlow Medal winner was prolific inside 50 against the Bombers without exerting himself too much, keeping him ripe for this contest against Richmond. Danger averages just under 35 touches in his last three outings against Richmond, including an impressive 38-disposal effort in 2019.

The last month of football has been different for Jason Castagna, as the small forward is getting up the ground and finding more of the football. Geelong’s defence shifts across the ground very well and can defend slow ball movement better than anyone else, which is why the Tigers need to move quickly in transition and look for their faster players – like Castagna – to hit the scoreboard.

The Richmond structure has worked very well in the last few matches, but the Cats have looked a class above since they beat the Power in round 12. Mitch Duncan, Cam Guthrie and Sam Menegola have all been massive for Geelong, while the possible return of Joel Selwood would add yet another weapon in the midfield.