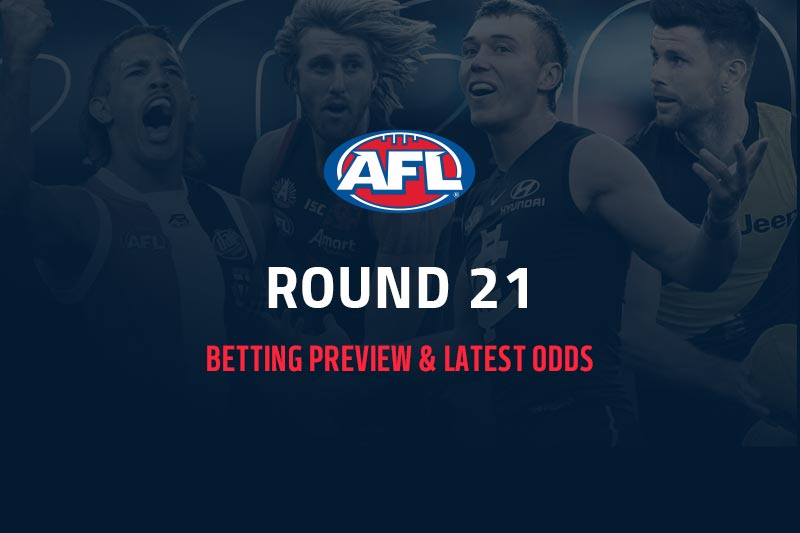 The 2021 AFL Premiership season continues this week despite widespread COVID restrictions, and the race for the last two spots in the top eight remains wide open. Here are all the games in round 21 as well as an update on the premiership market at Sportsbet.

The Western Bulldogs and Essendon were originally scheduled to play on Friday night, but Geelong and GWS will now open the round at GMHBA Stadium. The Giants fell out of the top eight after losing to the Power in round 20, while the Cats withstood an impressive performance from the Kangaroos in Tasmania. The Giants are still every chance to feature in the finals this year, but they will be hard pressed to stop a Geelong side chasing percentage and top spot on the ladder.

With a spot in the top eight still available for the Blues, they must get a victory this Saturday against the Gold Coast Suns. Stuart Dew’s men were blasted off the park in round 20, and that 98-point loss to Melbourne might have sapped any remaining confidence out of the young Suns. The Blues looked fantastic against the Saints in their 31-point victory, while should be available this week Tom De Koning after scans cleared him of any serious damage to his pectoral.

The Kangaroos have won three of their last six matches, while the Tigers have only recorded one win since round 13. The Roos gave Geelong a genuine fright last week at Blundstone Arena, keeping the premiership favourites to just 62 points. Can Damien Hardwick’s Tigers respond after round 20’s tough loss to Fremantle, or will the Roos cause an upset at the MCG?

The stars have aligned this weekend for the highly anticipated South Australian Showdown, as the Crows and the Power are scheduled for a big battle at the Adelaide Oval. Although the Crows have been miserable in four of their last five matches, the young squad should provide a tough contest against the finals-bound Power. Ken Hinkley’s men must win all of their remaining matches to ensure a top-four position.

Brett Ratten’s Saints have been their own worst enemy since round 18, performing poorly in three straight losses to the Power, Eagles and Blues. The Swans have won five matches on the trot and will look to end St Kilda’s finals push this Saturday night at Marvel Stadium. Dougal Howard has been outstanding at full-back for the Saints, but his season could be over after a hamstring strain in round 20. Expect the Swans to put on a show as they strive for a top-four finish.

Both Hawthorn and Collingwood recorded excellent wins last weekend against top-eight sides, building plenty of anticipation for this Sunday’s battle. The coaching situation for both clubs is very interesting; the Hawks’ succession plan only lasted a few weeks, while the Pies are still searching for a new coach. This will be the first time the Magpies play for premiership points in Tasmania.

If crowds were permitted in Victoria this weekend, you could almost guarantee this clash between the Bulldogs and Bombers would be a sell-out. The Dons suffered even more injuries in their close loss to the Swans, as Dyson Heppell broke his thumb and Kyle Langford re-injured his hamstring in his first game back. The Bulldogs are favoured by online bookmakers this Sunday and should get the job done, which could end the Bombers’ push for a top-eight finish.

Despite missing three senior players including Nat Fyfe, the Dockers were good enough to knock off the Tigers in round 20. The Lions were embarrassed by the Hawks at UTAS Stadium, trailing by 53 points heading into the final term. Alex Pearce should return from concussion to help the Dockers tackle Joe Daniher, which has us believing they can cause an upset this Sunday.

Monday night football returns this week in Perth as the West Coast Eagles host Melbourne at Optus Stadium. The Dees have lost their last four encounters against the Eagles, but they are the favourites heading into this battle. Can the Eagles bounce back after their 45-point loss to the Magpies last round, or will the in-form Demons notch their 15th win of the season?

The premiership market has barely changed since last week’s update, with two exceptions. The Swans ($7.50) have overtaken the Power ($9) and now occupy the fourth line of betting, while the Lions have fallen from $7.50 to $11 after a bad loss to the Hawks. Punters should take a good look at the Western Bulldogs at $4.20, as the return of Adam Treloar will bring another element to their already potent midfield mix.