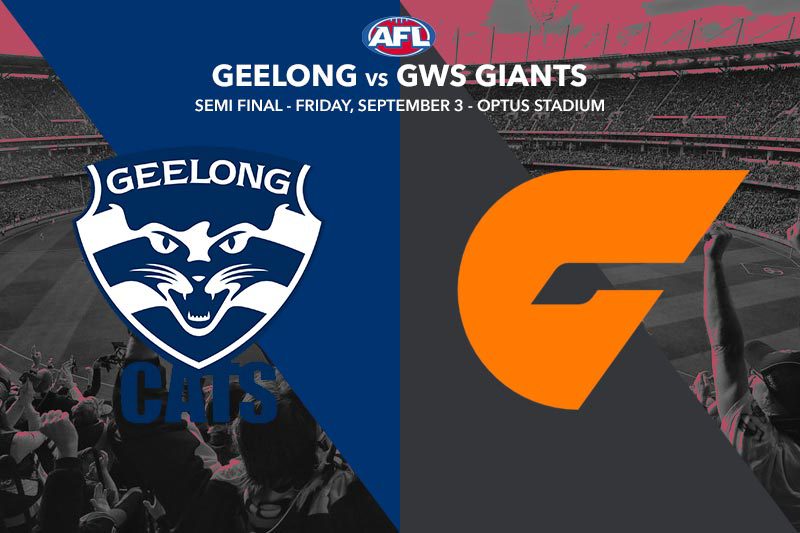 The second week of the 2021 AFL Finals Series kicks off this Friday night with a sudden-death clash between the Geelong Cats and GWS Giants at Optus Stadium.

There has been plenty of build-up during the week heading into this contest, mostly surrounding GWS superstar Toby Greene, who has been handed a three-week suspension for making contact with an umpire during the Giants’ one-point win over the Sydney Swans.

Chris Scott’s Cats were embarrassed by the Power in their 43-point loss last weekend, but their main concern heading into this Friday’s match will be the fitness of Mark O’Connor.

The Irishman was subbed out against Port Adelaide with a hamstring injury, but luckily for the Cats, Zach Tuohy is ready to replace his compatriot after three weeks on the sidelines.

A spot in the preliminary finals is on the line this Friday night, as the winner of this battle will face off with Melbourne next weekend.

The Giants taught Geelong a lesson in their upset victory back in round 21 as they outclassed the Cats at GMHBA Stadium despite missing a large portion of their best 22. GWS used fast ball-movement to penetrate Geelong’s tight defence, while an enormous effort from Sam Taylor stopped the Cats from kicking a winning score.

It will not be easy for the Giants to replace the talented Toby Greene, who has led their forward line this season with an average of 2.5 goals per game. One underrated role-player that might step up is Daniel Lloyd, who has kicked a goal in 13 of his 15 outings in 2021. Lloyd has similar attributes to Greene and could provide a spark up forward for GWS this Friday night.

Two of the toughest players in the AFL will face off this Friday night when Joel Selwood and Callan Ward clash in the middle of Optus Stadium. You can count on Selwood and Ward to put their head over the ball in every contest, and that kind of hard-nosed leadership is invaluable in finals footy. We think both players offer great value in the major disposal betting markets.

Although the Cats have lost three of their last four matches, we expect the experienced side will steady this weekend and get their revenge against the Giants. The loss of Toby Greene will be tough for the Giants to cover a week after their one-point victory over the Swans. Jeremy Cameron should impact the scoreboard heavily in his first match against his old teammates.

With 19.7 in 15 games this season, Daniel Lloyd has become one of the most consistent forwards at Greater Western Sydney. Although he is not the most high-profile player, Lloyd provides a great target inside 50 and knows his way around the goals at ground level. Lloyd has kicked multiple goals in each of his last two games against the Cats, and we think he can do it again this week.

We expect the Cats to win their third consecutive semi-final this Friday night against the undermanned GWS Giants. Daniel Lloyd will continue his solid form against Geelong with a couple of goals, while Selwood should see plenty of the footy as the Cats progress to the prelims.