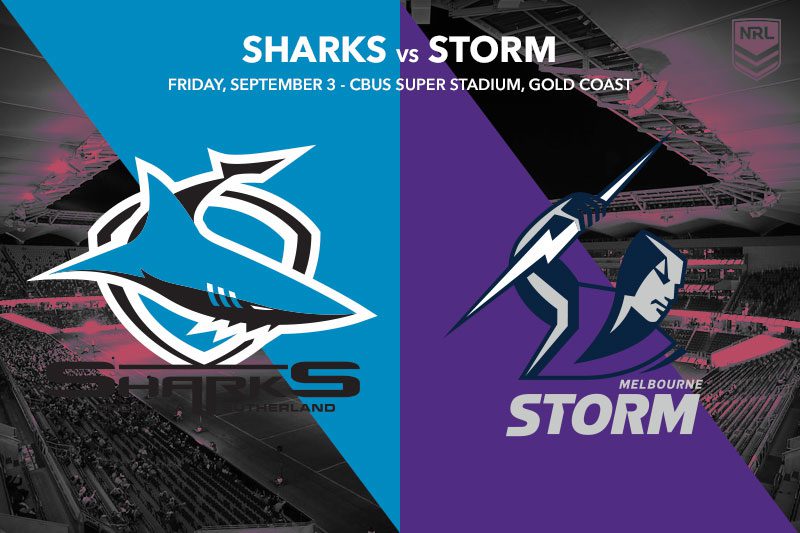 The Cronulla Sharks and Melbourne Storm will lock horns in the first game of an NRL double-header on Friday at Cbus Super Stadium.

The situation for both clubs to achieve important milestones couldn’t be simpler. A win for the Sharks guarantees they finish in eighth position and play finals football for a seventh consecutive season, while the two points for Melbourne guarantees them their eighth minor premiership title in just 24 years of existence.

Melbourne have rested eight regular starters but still field a fantastic side which would start as favourite against perhaps 11 NRL teams. Dale Finucane makes his return to the squad and will captain the side in his final regular-season match for the Storm.

The Sharks have stuck solid to the team who got the job done against Brisbane in Round 24 and will need to get just their second win against a top-eight opponent in two seasons to keep the Raiders and Titans at arm’s length.

Normally getting multiple tryscorers against the Storm is hard to pick, but their weakened side opens up some chances for the Sharks. Will Kennedy is an absolute must at $3 considering he has 14 tries in season 2021. Connor Tracey at $3.20 is also another who deserves a thought, as he has eight tries in his last 14 appearances for Cronulla and could be nuisance against the Storm’s slightly suspect right-edge defence. Cronulla have covered the line in each of their last nine games as an underdog, so the +9.5 start is worth a shout in this contest against a diet Melbourne Storm side.

Even when they’re missing Cameron Munster, Christian Welch, Felise Kaufusi, Jesse Bromwich, Josh Addo-Carr and Reimis Smith, the Storm are still an enormous pain in the neck to deal with. The 1-12 margin at $3.30 should be the best backed market for Melbourne with an eye on the finals. Last year they rested players in the final round and lost in the final minutes before going on to win the premiership, so there is a blueprint for them to navigate the necessary evil that is Round 25.

Brandon Smith at $18 with Sportsbet is a sensational value bet to open the scoring because of his ability to scab tries from close range. Opposition teams always feel like the danger of the Storm is how they pull you apart by playing with width, but the ‘block of cheese’ up the guts is just as good of a bet as any winger. Justin Olam at $2.20 is another great option for a same-game multi.

Ryan Papenhuyzen tore the competition to shreds in the opening eight weeks and has struggled to recapture his best form since returning from a nasty concussion. Will Kennedy has had a fantastic season at fullback and should win the Monty Porter Medal as Cronulla’s best and fairest player, so he should provide Papenhuyzen a great challenge to rise up to.

If Papenhuyzen is unable to find his best in this game, does it mean Craig Bellamy has a fullback controversy on his hands? How does he handle the fact Nicho Hynes – who will join the Sharks next season – is in far better form than Melbourne’s long-term no.1?

Melbourne will bounce back from last weekend’s loss and win the game by 1-12 points, led by the diminutive halfback Jahrome Hughes. The game will be tight until halftime, but the Storm will pull away just enough to do what they need to do before turning their focus to defending their title.

Storm 1-12 with Connor Tracey, Justin Olam and Brandon Smith to all score a try pays a whopping $62.50.