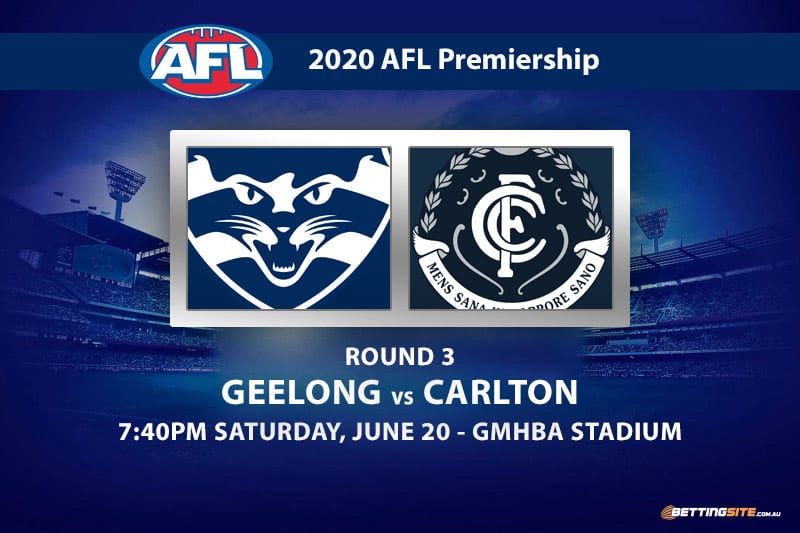 The Carlton Blues jump out of the pan and into the fire this Saturday night as they drive down the highway to Geelong in round three of the 2020 AFL Premiership season.

David Teague took a bittersweet tone in his post-match presser after last week’s loss to Melbourne, applauding his team’s effort to come back and nearly snatch the win despite such a poor start.

On the other hand, Chris Scott was the happiest man in town when the Geelong Cats smashed the Hawks at home, beating their tough rival by 61 points.

Unfortunately for the Blues, Nic Newman tore his patellar tendon against the Dees and will miss the rest of the season, meaning they will need to find some new legs across half-back.

Gary Rohan will play for the Cats despite twisting his knee last week, while Jack Steven looks set to make his long-awaited Geelong debut following his switch from St Kilda.

The Blues will be 0-3 if they can’t overcome the Cats at Kardinia Park, which is something they haven’t done since 1996.

Most pundits are quick to remind you about the Cats’ established stars such as Joel Selwood and Patrick Dangerfield, but we think some of their younger players are worth keeping an eye on. Brandan Parfitt is an emerging midfielder that has built his game around elite tackling and stoppage play. Parfitt’s 2019 disposal average hovered between 18 and 22 for the entire year, but that should improve this year with more minutes on the ball.

Sam Walsh has been heavily criticised for some of his efforts late in last weekend’s loss to Melbourne. Most second-year players would be floored by that sort of backlash, but Walsh already has the air of a seasoned professional that can cop a hit and bounce back. Expect big things from the 2019 AFL Rising Star this Saturday.

Carlton’s back six have struggled in the past when midfielders push forward, as it complicates the matchups and causes havoc. Patrick Dangerfield showcased this in his last game against the Blues, kicking four goals and three behinds. The Blues will be worried about Danger’s impact forward, but they still won’t be able to stop him.

Someone needs to step up in the Carlton forward line after last week’s shambles, and that man is Mitch McGovern. The former Crow has always been an exceptional kick for goal, but he made some costly errors against the Demons. If David Teague gives McGovern another chance this week, he should take a few marks and convert a couple of chances.

Of the four matches these teams have played this season, the total score has exceeded 155 in three of them, with Carlton’s poor performance last week the only exception. The Cats have been strong in the forward half so far this season and we expect them to score well this Saturday. If the Carlton forwards go back to basics and stick a few through the middle, they should kick a respectable total.

It won’t be easy for this young Carlton lineup to quell the Cats, especially considering how potent Geelong looked in last Friday’s emphatic win over Hawthorn. If the 68-point margin in their meeting at GMHBA Stadium in round 23 last year is any indicator, Chris Scott’s will go to 2-1 with a comfortable win.