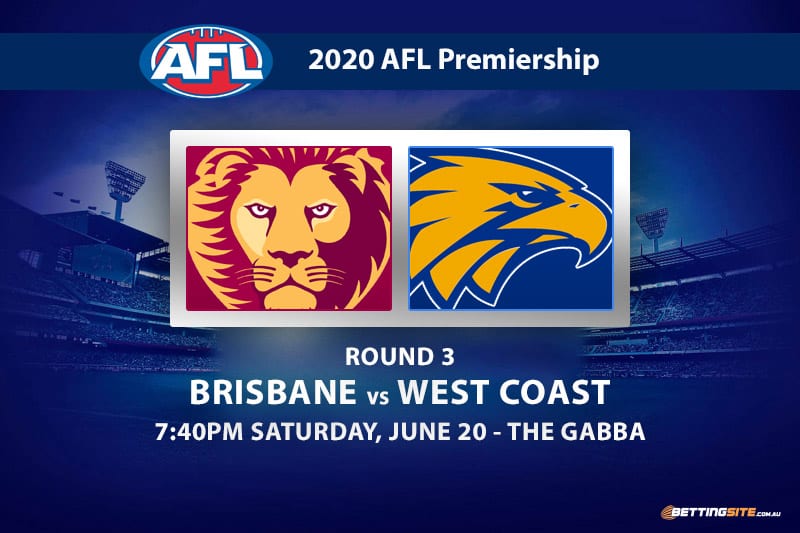 Round three of the 2020 AFL Premiership season features some good matchups, but the Brisbane Lions and West Coast Eagles on Saturday night may be the pick of the bunch.

Both have emerged as teams to watch in recent times, with the Eagles winning the 2018 premiership and the Lions bolting into the finals last year.

Starting the season 1-1 was not the plan for either side, but it is almost impossible to get a read on West Coast after last week’s horror loss to the Gold Coast Suns.

Not only did the Eagles drop a seemingly unlosable match, Jeremy McGovern’s suspension for striking Alex Sexton means they lost the four premiership points and their best defender.

The Lions were good enough to defeat the Dockers in their first game back, although it wasn’t a convincing win at all.

The shortened season has put a premium on every result, not least when two clubs with premiership ambitions face off.

Always a beautiful kick of the footy, Daniel Rich has developed into a true leader for the Lions. The stocky rebound defender is All-Australian material, averaging 22.5 disposals per game last season. Starting off with 17 touches against Hawthorn and 21 against Freo, you can see the classy Lion isn’t affected too much by the shortened games.

It has been five seasons since Jack Redden made his move from Brisbane to Perth. The former Lion is a bull in the midfield, but the inclusion of Tim Kelly has seen him get less time in the guts. The Eagles were torn apart by a tougher Suns midfield last week, which should see Redden get more time on the ball as West Coast look to tame Lachie Neale, Dayne Zorko, et al.

We think the suspension to Jeremy McGovern is going to be costly from the first bounce, as Eric Hipwood will have an easier opponent to start the game. The Lions could look to Hipwood at any moment, given the young star’s ability to take marks on a lead and convert accurately. Charlie Cameron at $8 is another solid first goalscorer tip.

Harris Andrews owns the air in the Brisbane backline, but the twins threats of Jack Darling and Josh Kennedy take serious minding. Darling has a great workrate that allows him to kick goals out the back, which is where he may find some joy against the Lions this weekend.

Despite their premiership ambitions, neither side has shown any great defensive acumen so far this season. With McGovern missing for the Eagles, this game could eclipse the 140-point mark with ease. Both teams have electric forwards and fast midfields, so we can expect to see plenty of goals scored on the break.

Chris Fagan has got the Lions playing good footy since taking the reins in 2017, but is this the year they take the next step and become genuine premiership contenders? We like Brisbane’s chances at the Gabba.