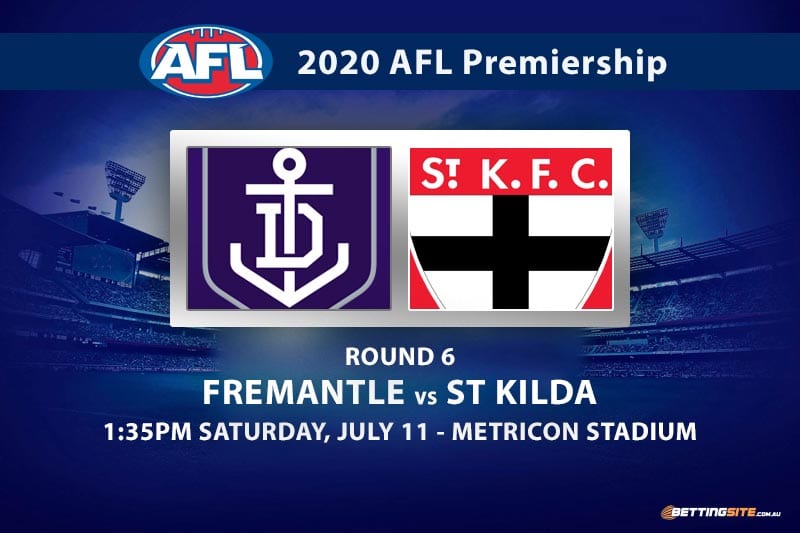 Saturday’s double header on the Gold Coast kicks off bright and early with the Fremantle Dockers and St Kilda Saints at 12:35pm AEST.

Freo captain Nat Fyfe is a slight chance to get up for this contest, but the dual Brownlow Medal winner needs to prove his fitness at training less than two weeks after injuring his hamstring.

Jesse Hogan will miss this match with a soleus strain, putting him on the sideline for three weeks. The Dockers will miss the big forward’s presence inside 50, but Brennan Cox is a chance to return in his stead.

The Saints sit inside the top four on the back of three impressive wins since the competition resumed, including big victories over Richmond and the Western Bulldogs.

Now facing one of the least fancied teams in the AFL, Brett Ratten and co. will look to use this match as a platform to launch themselves into premiership contention over the next few weeks.

In the absence of Nat Fyfe, Andrew Brayshaw stepped up in beautiful fashion last week with 23 touches against Adelaide. The no.2 draft pick from 2017 is emerging as a real talent in the Freo midfield and will need to stand up again if the Dockers are to have a chance this week.

Like Brayshaw, Jack Billings went high in the draft and is starting to come into his own this season. Billings’ highest disposal average is against the Dockers, going at just under 24 touches per game. He collected 27 and 32 in his last two clashes with Freo, so the form is promising.

With Jesse Hogan out for the Dockers, another key forward needs to stand up, but the truth is that Matt Taberner has been a consistent goal threat this season. With seven goals already under his belt in 2020, Taberner should feel confident of delivering the goods as the no.1 Freo forward this weekend.

Fast forwards are the most damaging players in the league right now. A prime example is Dan Butler, who may well be leading the St Kilda best and fairest after five rounds. Butler has nine goals this season, including the opener against Collingwood, and should be busy early against an ordinary Freo side.

As much as we would like to take overs because of the St Kilda’s ability to score, this game will go unders as the Dockers play the most defensive style in the competition. Freo’s last three matches have gone unders for total points, and this will be no different as the underdogs look to grind out a result against the more talented Saints.

It might be low scoring, but the Saints are good enough to beat the Dockers by over 20 points. Max King is starting to gain confidence and the new arrivals are blending into the team nicely. Brad Hill will enjoy facing his old teammates and should teach them a lesson with his electric pace from the wing.