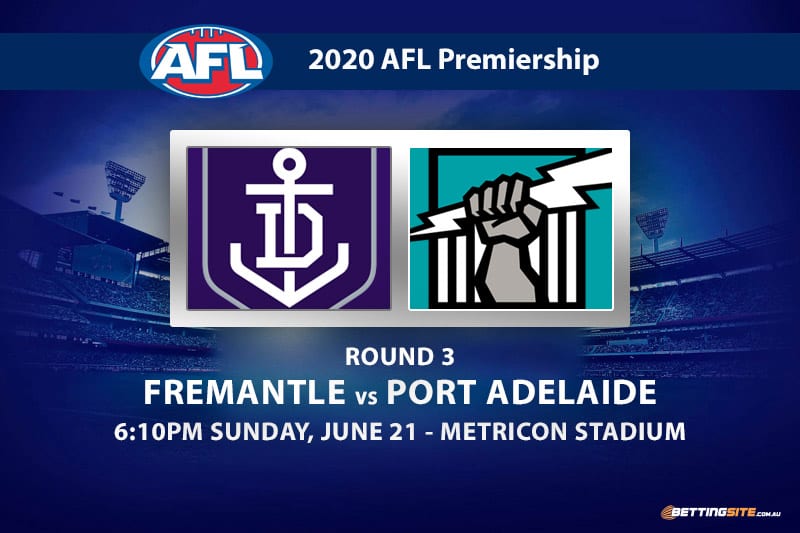 Round three’s final match will be a belting contest between the Fremantle Dockers and Port Adelaide Power at Metricon Stadium.

There are plenty of stories to come out of this game for both sides, including where the goals will come from for the Dockers and how good the Power really are.

Port Adelaide sits atop the AFL ladder with two big wins from two games, but those came against the Gold Coast Suns in round one and a deplorable Adelaide side in last week’s Showdown.

Although the Dockers are yet to win a match, they played reasonably well in the opening two rounds, especially the second clash with the Brisbane Lions last week.

Two key inclusions for Fremantle are Jesse Hogan and Sam Sturt in the forward line, as they provide goalkicking targets inside 50 that cannot be underestimated.

Ollie Wines will be playing for his pride this weekend if he manages to slip into the side, as he isn’t having the best year in terms of leadership and physical fitness.

We can’t wait to sit back this Sunday afternoon and watch these two hub teams battle on neutral ground for premiership points.

The youngest of the Brayshaw trio was taken as the highest draft pick, beating his brother Angus by one position as the no.2 selection in 2017. Andrew has all the qualities that make a great midfielder, including excellent fitness, competitiveness and motivation, but he hasn’t developed enough to play there full-time yet. Even on a forward flank, we think Brayshaw can push up the ground and get 20 disposals with ease.

There is no better second-year player in the competition right now than Connor Rozee, and that is a class that includes 2019 Rising Star winner Sam Walsh. Rozee is playing a combination of midfield and forward, but it seems like the footy is magnetised to him at every contest. The athletic beast is starting to tear games apart very early in his career, and we think he will have a lot to say against the Dockers this Sunday.

Coming back into the squad after years of off-field obstacles, Jesse Hogan appears ready to rumble once again. Formerly known as the future of key forwards in the AFL, Hogan is now a running machine that can play anywhere on the ground. The Dockers will understand how important the start will be for Hogan and target him in the first quarter.

For the Power, all signs point to Todd Marshall. He has kicked six goals in two games against Freo, including a career-high bag of four in March 2018. Starting off this season with two goals in both matches, Marshall has come alright to begin his fourth AFL season. At $5, you have to consider Marshall to kick a couple more against the Dockers.

No side in the competition has scored as well as the Power in their first two matches, while the Dockers have also put on their fair share of goals. Even though Port Adelaide has conceded the fewest points of any team this season, we believe this game will exceed the 134.5 line due to the inclusions to Fremantle’s forward line.

We like the team Fremantle will field this week and consider them a slight threat to win this match. The Power have looked good, but they beat up two teams that are expected to finish in the bottom four this season. This game will be closer than the bookies are forecasting, so there is great value in the $2 line bet with Fremantle.