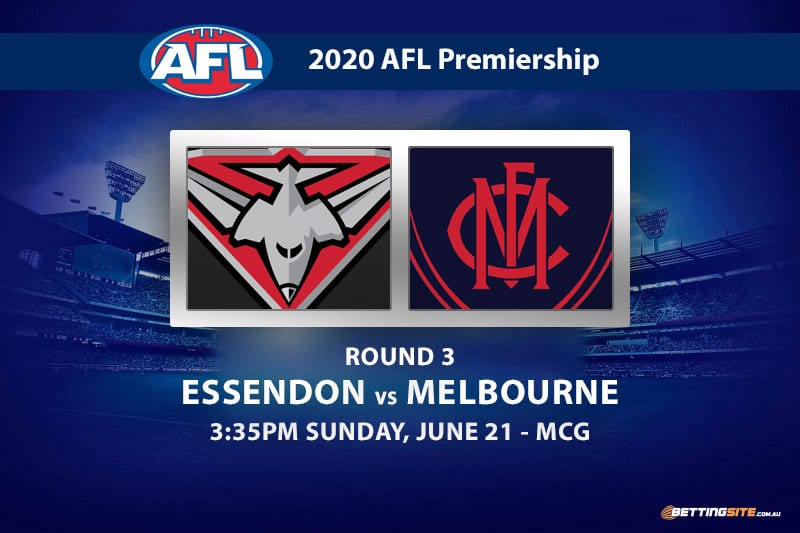 Two of the 2020 AFL Premiership season’s wildcards will clash at the MCG this Sunday afternoon when the Bombers and Demons go head-to-head.

Two scrappy wins against two mediocre sides doesn’t provide us with any useful insight into Essendon, but it is clear that this team loves using speed to attack from defence.

Melbourne bullied the Blues in an opening-quarter demolition job, piling on 32 unanswered points to set up a seemingly insurmountable lead.

The Demons took their foot off Carlton’s throat, however, allowing the Blues to come back and nearly pinch a miracle victory.

You never know what could happen if either of these sides plays four perfect quarters, but we think they could challenge the best teams on a good day.

Strap yourself in for this one, as it should be played at breakneck speed with tough contests all over the ground.

Dylan Shiels’ class was highlighted against the Sydney Swans last week as he used the ball better than usual and still found 22 touches. The Demons do not have a tagger on their squad to hold back Shiel, leading us to believe he will have a great game against the tough midfield of Clayton Oliver and Jack Viney.

Although his 2020 season has started slowly, it would be rude to ignore what Angus Brayshaw brings to the Melbourne midfield. In his last match against the Bombers early in 2019, Brayshaw had a game-high 34 touches and kicked a goal in a best-on-ground display. He has eclipsed 20 disposals in 32 of his last 46 matches, including nine returns of 30 touches or more.

We cannot believe that one of Essendon’s most dangerous forwards is paying over $2 to kick a single goal. Devon Smith has kicked 22 goals for the Bombers from his 31 matches and looks raring to go after missing much of 2019 through injury. With two goals and three behinds for the season so far, Smith is getting more than enough opportunities to suggest he can kick a goal against the Demons.

Now is the time for Christian Petracca to announce himself as a genuine star of the competition. His explosive pace and strength through the hips allow him to break tackles and shake off defenders. Petracca was in best-on-ground conversations last week with his 24 touches and pair of goals, which is what we expect from him this Sunday as well.

Either team to win by 15 points or less

The Bombers have played in plenty of close matches throughout the last few seasons, and we used that information to hit this exact tip last week. Both these sides have shown a tendency to start fast and fade late, so there is a good chance they will be neck and neck for much of this contest.

We like the Demons in this clash even though they are the underdogs. Simon Goodwin’s men have been criticised for their lack of professionalism and letting Carlton back into the game last week, but the Bombers might struggle in the midfield with Dyson Heppell out of action. Max Gawn will lead his Demons by example, convincingly beating Tom Bellchambers in the ruck to set up the win.