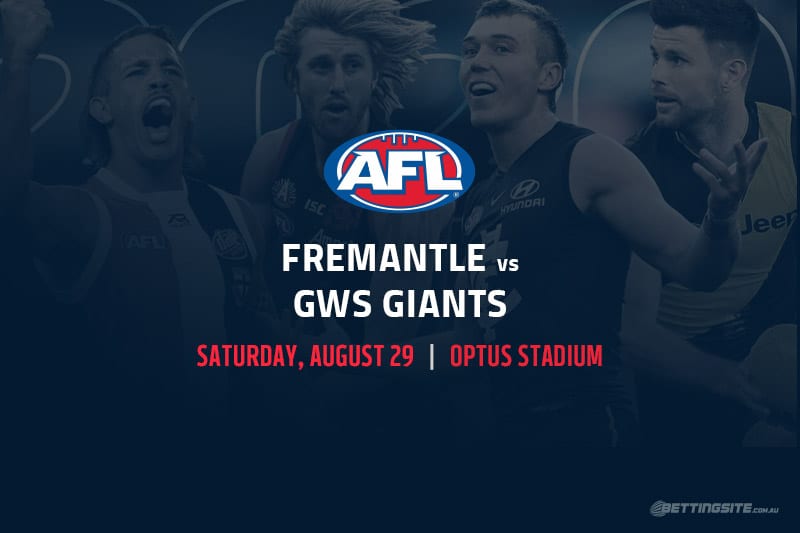 You can expect max capacity support from the purple army at Optus Stadium this Saturday, as the Fremantle Dockers have won three of their last four to creep onto the fringes of finals contention.

The GWS Giants were gallant in defeat against the West Coast Eagles, recovering from a poor start to finish within two straight kicks of the premiership favourites.

There were no injuries for the Dockers in their round 13 win over the Swans, but the Giants did lose former captain Callan Ward, while Phil Davis is still a few weeks away from a return.

Even though the Giants made the AFL Grand Final in 2019, the Dockers defeated them by 24 points in their only meeting of the year.

Stephen Coniglio has been very strong for the Giants in the last few weeks, putting together a solid block of footy since round seven. The West Australian midfielder loves the matchup against the Dockers, having posted a career-high 37 touches against them last season. With Ward out for at least a month, Coniglio should spend more time in the guts and win plenty of footy.

At the peak of his powers, Nat Fyfe is an unstoppable force. With Freo building a strong midfield of up-and-coming stars, the two-time Brownlow Medal winner can now spend more time forward and look to impact the scoreboard directly. Having already kicked eight goals in his nine matches this year, the 6’4″ Fyfe is like an extra centre-half-forward when he goes down there.

The Dockers won the 2019 clash by four goals against a near full-strength Giants outfit, and we think they will have a crack again this Saturday. There is a slight void of leadership in the GWS group with Ward and Davis out, while the tight-knit Dockers have shown great team chemistry this season. Recent form also favours Freo; the Giants lost to Sydney by 41 points in round 12, while the Dockers defeated the Swans by 31 last week.