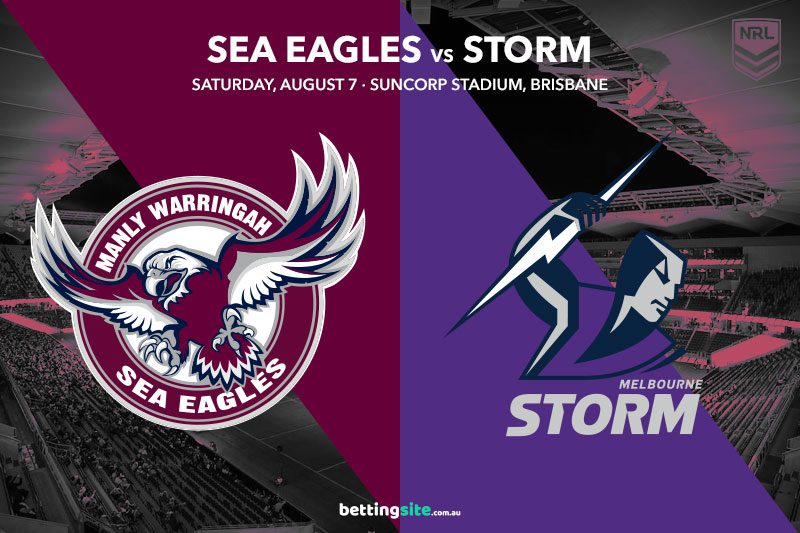 One of the biggest games of the 2021 NRL season will take place at Suncorp Stadium on Saturday evening when the Manly Sea Eagles face the Melbourne Storm.

The two clubs have forged a bitter rivalry over the last 15 years, and there will be no love lost as the Storm look to win their 17th consecutive NRL game. They come in as the $1.30 favourites, but if there is a team who can give them a run for their money before the finals, it is this Sea Eagles side.

Tom Trbojevic was dominant yet again in a win over the Sharks in Round 20, but the defensive line he will face this week is going to be much stiffer. The Sea Eagles forwards face a difficult task of trying to outmuscle their more battle-tested rivals, but they would surely know in the back of their minds that if they can at least hold their ground, they have the best player on the field.

History beckons for the Storm in the coming weeks if they can keep their incredible winning streak alive, but one of the great NRL villains in Manly would take pleasure in spoiling the party.

Since Manly started the season 0-4, they’ve gone on to win 12 of their next 15 games based in large part to the return of Tom Trbojevic at fullback in Round 6. He has a whopping 18 tries in 11 games this season, and the team is 9-2 with him in it. They are up against it, but the +12.5 line is one to keep an eye on. The Sea Eagles have covered the line in five of their last six games against the defending premiers, so are they primed to do so again?

As good as the Storm are defensively, Manly can score from anywhere on the park. That strike power could well be what sets the Sea Eagles up as a serious challenger, as opposed to other sides who the Storm know they can hold out with relative ease. Taking Tommy Turbo as a $2.10 anytime scorer or $13 first tryscorer with Sportsbet.com.au is going to be the most popular option, but punters should also keep an eye on Brad Parker in both markets.

Given their dominance in Queensland, the Melbourne Storm are very chance to cover the -12.5 and make it 16 from 17 games where they have bettered the line. Three of their players are in single figures to score the first try of the match, but the form of Jahrome Hughes at halfback is impossible to ignore at the $15 price. His running game has been electric, and his support play back through the middle will get him across the line. Justin Olam, Josh Addo-Carr and Nicho Hynes will also get a ton of attention in the anytime tryscorer market, with Addo-Carr paying a short $1.40 as the favourite.

The Nicho Hynes/Ryan Papenhuyzen fullback duo makes it difficult to single out an individual battle in that part of the field, but one contest that is slept on is Justin Olam up against Morgan Harper in the centres. The Storm have run riot down the left side this season, and the pressure the right centre faces in the opposition is frightening. Harper leads the competition in one-on-one tackles and has proven to be another successful bargain buy for Manly, who have done well off the scrapheap over the years. His performance in Round 13 against Bradman Best was exceptional, and it showed the blue print for how he can slow down Olam. If he can limit the blockbusting Kumul’s opportunities, it makes life much easier for the defenders around him.

As hard as Manly may push them at certain stages in the game, the Storm will win and cover the -12.5 line. We are watching the greatest attacking team in the history of rugby league in Australia, and while the rule changes have helped them, it is a fact that should not be slept on.