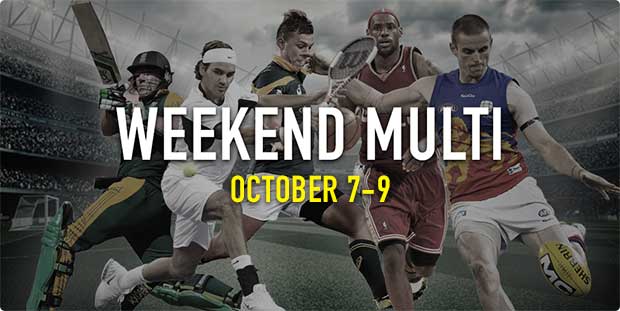 THE English Premier League might be on hiatus, but there is still a smorgasbord of sport on the offering this weekend, with the A-League and NBL kicking off their seasons and the NFL in full swing.

We are big fans of a multi sport parlay, so we have inspected this weekend’s events and come up with a six-legger that we hope will help you – and us – win some cold hard cash.

For all intents and purposes, we think that the Brisbane Roar will win their A-League season-opener against title favourite Melbourne Victory, but its not a fait accompli, so we are going with something that we think is a little more certain. If all goes to plan, these two teams will be among the highest scoring in the competition this season. The Roar have star striker Jamie McLaren, backed up by a midfield of Socceroos men Brett Holman and Tommy Oar, along with Matt McKay, Brandon Borrello and Thomas Broich, all men who know their way to goal. Add to that the fact that the Victory has, perhaps the most powerful strike force in the competition and you have a recipe for goals. Take your pick out of Besart Berisha, James Troisi, Marco Rojas, Fahid Ben Khalfallah or Mitch Austin. There are weapons everywhere. Watch the goals rain.

Perth Glory is on the second line of betting for the A-League title. The Central Coast Mariners are on the second line of betting for the wooden spoon. Do the math. Ok, well it is not always so clear cut in the A-League, but, given that it is on Perth’s home deck and the Glory has cleaned up at the recruiting table, this one looks like real value at $1.55. Glory finished fifth, but lost to Melbourne City in the first week of finals, but the likes of new signings Adam Taggart, Rhys Williams and Rostyn Griffiths have been a huge boost and any side with superstar Diego Castro is going to be a massive chance.

Last year, you would have been on New Zealand to pummel Melbourne United all day in this one. But times have changed. Breakers superstar Cedric Jackson opens the NBL season in new colours, returning to the place he became a legend. United has added Jackson to a side that boasts scoring machine Chris Goulding, towering fellow Boomer David Andersen, and a pair of imports that could set the league alight. The Breakers are basically the Tall Blacks side, with the likes of Corey Webster always a danger. But we think United has too many weapons and, with Jackson setting them up, it should be a happy homecoming for the former NBL MVP and three-time champion.

Unbelievably, the New England Patriots are 3-1 and are on top of the , despite the fact star quarter back Tom Brady has missed all four games with suspension and second pick Jimmy Garoppolo went down with injury early. Third stringer Jacoby Brissett did nicely early on, but hit the wall against the Bills last week in a shut out loss to the Bills. The timing could not be more perfect for Brady’s return. And, while you think he should be able to ease into it nicely, this is Tom Brady we’re taking about… with a chip on his shoulder. This could be a monstrous result and we feel like the $1.18 is better than bank interest.

Super Bowl winners Denver were meant to fall off the perch with the retirement of the legendary quarter back Peyton Manning. But how wrong have the pundits been? The Broncos won a thriller on the season opener against the Panthers, but have not been troubled in three games since, remaining the only unbeaten team. The Falcons are 3-1 and tops in the NFC South, but they will struggle to cope with the new school Broncos on the home deck.

Haven’t the Steelers been pretty to watch. The 3-1 Steelers take on a middling Jets side that has, at times, looked a finals chance and, at other times, looked like it could take the wooden spoon. It feels like there is a collective class difference between these two teams and, with the likes of two time Super Bowl champion Ben Roethlisberger putting his stamp on every thing the Steelers do, along with the ridiculous start to the season Antonio Brown is putting together, they should be just good enough to roll the Jets. It should be an entertaining game, in any regard with both teams sporting top tier talent.