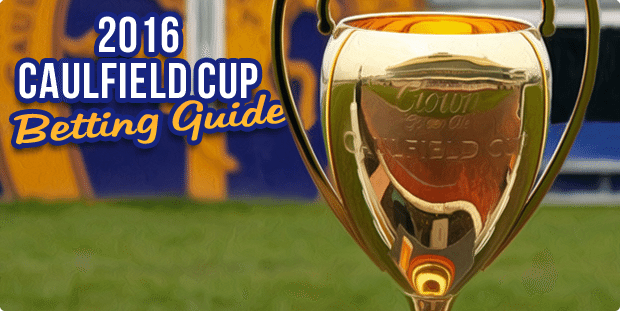 THE Caulfield Cup is one of the most important races in Australian racing as it attracts international interest and it is a great guide to the Melbourne Cup on November 1.

The $3 million Group one runs this Saturday at Caulfield and a talented field of 20 runners has been accepted with four international entries included.

Jameka heads the even field in the betting, but bookmakers are offering great each way prices for the rest of the field and we take a look at the best value chances for the 2016 Caulfield Cup.

With only four runners at single-figure odds, the 2016 Caulfield Cup is a wide-open affair and we’re expecting punters to lock in the early value on offer at Sportsbet.com.au.

Sportsbet will give punters $50 back in bonus bets if your runner finishes second or third in the first four races on Caulfield Cup day which can be used on the Caulfield Cup.

The barrier draw in staying races isn’t as important as in sprint racing, but the market is still influenced by the draw.

Jameka would likely have been paying less than $3.40 had it drawn a better barrier than three, but in our opinion it’s too short in the market currently. Punters should look to get Jameka at around $4 with CrownBet before taking the short odds on offer.

Group 1 Metropolitan Handicap winner Sir John Hawkwood has drawn favourably in barrier five which will give it every chance to sit on the speed. It won from a good position at Randwick so expect jockey Blake Spriggs to provide a confident ride on the former import.

All four international runners (Scottish, Sir Isaac Newton, Exospheric and Articus) have drawn well and the visitors draw is clearly not in effect this Saturday. Exospheric has drawn best in barrier three and Damien Oliver takes the ride.

Our Ivanhowe is a solid each way bet at $26 despite its recent effort at Flemington when it finished eighth in the Group 1 Turnbull Stakes.

The seven-year-old is a three-time winner at this distance and it showed its class by winning the Doomben Cup over Hauraki earlier this year.

It’s not a consistent type, which is what has turned punters off for the Caulfield Cup, but it gets top Victorian jockey Dwayne Dunn in the saddle and it has been set for the Cups this spring.

Worth an each way bet at the juicy odds.

A winner of the Group 1 Metropolitan at its last start, Sir John Hawkwood is a logical inclusion in Caulfield Cup selections.

The eight-year-old has done nothing wrong since arriving in Australia and it has form behind Real Love ($8.50) when it finished only a length behind it in the JRA Cup. Considering the price difference between the two, the value is clearly with Sir John Hawkwood.

It has had seven starts at this distance for three wins and two placings and it handles all track conditions. This is a harder race than the Metropolitan, but it carries a light weight of 53.5kg and it is drawn to get a soft run in transit.

Winning back-to-back Group one races isn’t easy, but it doesn’t deserve to be paying $15 in an even race.

The Darren Weir-trained mare must be considered following its win in the JRA Cup at Moonee Valley. The six-year-old is trained to run over the staying distances and punters should be looking towards its effort for seventh in the Naturalism behind Jameka.

It finished six lengths behind Jameka on that occasion, but it was running on strongly over the 2000m and the race wasn’t run to suit. It drops down 5.5kg from its last start win and Craig Williams knows how to win around Caulfield.

The $8.50 at CrownBet is a fair price for a 10-time winner and it has the ability to turn the tables on Jameka which is much shorter in the market at $3.40.

Can’t rule out Darren Weir in anything at the moment and we expect its current price to drop throughout the week.

We wouldn’t want to take anything shorter than $7.50 so it might be best to secure that price while it lasts.

The European raider is the best pick of the international runners following its win in the Strensall Stakes last start where it was under heavy riding from jockey William Buick, but it responded nicely.

The five-year-old is a winner of four from 11 starts and it has the breeding to suggest a big effort will come. Trainer Charlie Appleby is happy with its progress since arriving in Australia and its one of those horses which looks to have a fair amount of grit.

In typical European fashion, Scottish will likely sit midfield before being produced for a sustained run around the outside of runners. The imports like to have clear running room so expect Kerrin McEvoy to ride it accordingly and be tough to beat.

Why we think Jameka won’t win the Caulfield Cup

Jameka is the $3.40 favourite due to the lack of top quality opposition. The other runners in the Caulfield Cup are all good horses in their own right, but there are no superstars in this field which has left Jameka as the popular elect.

It’s a four-year-old which has won only four times from 18 starts and although it won well in the Naturalism at Caulfield, the second-placed runner was Gallante which has failed to frank that form.

Its most recent start at this distance was a fourth placing behind Sofia Rosa in the ATC Oaks, but it’s facing some seasoned stayers in this and we are doubting its toughness to stick with them when the pressure goes on.

If the rain was to come and the Caulfield track turned to a slow-heavy rating, we would suggest backing Jameka, but it’s only fair on a dry track and we think punters deserve a much better price than the $3.40 being offered.

There has been some early action for the Caulfield Cup since the final field market opened on Wednesday morning.

Most of the action has been with the long-shot chances which punters have identified as the best value in the Caulfield Cup.

The Mick Price-trained Tarzino is known to produce its best efforts over the staying distances and bookmakers have been forced to cut its opening price of $26 into $21. Its form this campaign has been nothing short of disappointing, but punters are prepared to give it another chance.

European import Exospheric is the noted drifter among the fancied runners. It opened on the second line of betting at $8, but has drifted significantly out to $10 with CrownBet. It’s hard to see it winning with its recent form, but the $3.20 for the place at CrownBet is a better strategy.

Tally drifted from $11 to $15 due to the barrier draw. The John O’Shea-trained horse drew barrier 19 which will make it tough, but drawing a bad barrier in the Caulfield Cup doesn’t extinguish its chance altogether.

Kiwi runner Fanatic has drifted from $51 to $81 and we doubt that it will finish in the first half of the field.

Go Dreaming is into $101 at Sportsbet after it drew the inside barrier, but punters can shop better at CrownBet where it is offering $201.